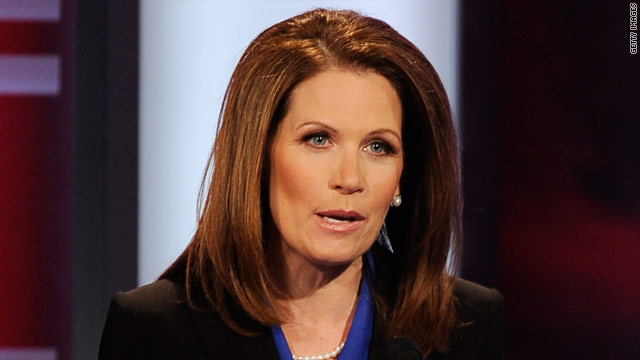 Her events have been largely of the meet-and-greet variety - get in and out as fast as she can. The campaign has instituted a "no questions" policy at a majority of her stops this weekend to keep things moving, and that generally applies to both the media and to Iowa voters.

But at her stop at a north central Iowa Pizza Ranch restaurant, she and her husband Marcus were met with a woman wearing a Bachmann sticker who was holding a sign that read: "Gay-friendly Iowan."

"I was wondering if you would sign my sign?" the woman wearing the sticker, who identified herself as Kathy Schnell, asked.

"Gay-friendly Iowan?" Bachmann asked with a small laugh as she signed her name.

Schnell thanked her and followed it with a question that, in reality, was more of a comment.

"I wonder if you're aware that 10% of the population is gay. And if you have 28 children, then 2.8 of those kids are very likely gay."

The congresswoman, within definite earshot as she hovered over Schnell, at first seemed to avoid the question, trying to say "hello" to someone new.

Schnell turned to her friend and said, "She's not listening to me."

Bachmann must have heard that because she then turned back.

"Well, that's according to the Kinsey Report," the candidate replied.

Dr. Alfred Kinsey is best known for conducting interviews with thousands of individuals and publishing his findings in books on human sexual behavior during the 1940s and '50s.

Bachmann's husband, who runs a clinic in their district in Minnesota that has long been accused of conducting "reparative therapy" by trying to help gay individuals become straight, then chimed in.

"Your facts are wrong," he said.

"That's not valid?" Schnell asked back.

"No it isn't," Michele Bachmann said. Her husband added, "No, it's not at all. It's been a myth for many years."

The presidential hopeful then moved to the next table. Schnell pulled off her Bachmann sticker.

Schnell later told CNN she is a Democrat who is not happy with the current Democratic administration and the Democrats in Washington.

Asked if she was surprised Bachmann signed her poster, Schnell said no.

"I think she wants to be a very nice person," Schnell said. "She's adorable. But I just don't think she should be our president."

Schnell wasn't the only one in the room passionate about gay rights. A handful of college students were also on hand in the restaurant at the time, but did not try to raise a question. After the event, however, the group stood outside waving rainbow flags, a common symbol of gay rights support.

Quentin Hill, an 18-year-old student at the University of Iowa, said he wanted to ask her a question as she worked the room but was told ahead of time not to.

"They weren't taking questions today. I asked one of her staffers and I was kind of shut down as soon as I started asking," Hill said, adding that he wanted to ask her about the issue of gay teen suicides.

"I think if you want to be president of the United States, first of all you have to realize that you are representing all Americans including gay Americans and secondly you should be able to answer questions," Hill said.

"If you want my vote, I want to know what you stand for. So I think it's unfortunate that she comes and shakes hands and signs some signs and thinks she's going to get votes out of that."

Huntsman: Everyone gets 15 minutes of fame