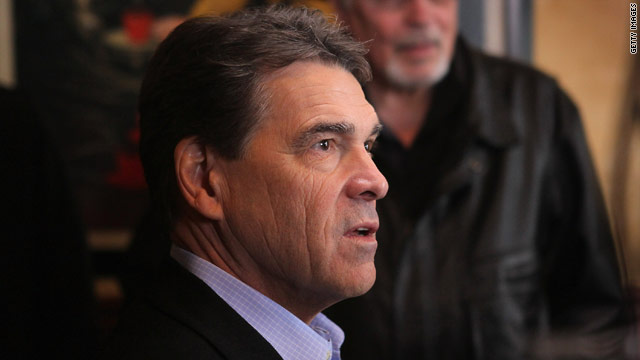 During a bus tour swing through rural eastern Iowa, the Texas governor touted his small town values and blasted the Wall Street "den of thieves" for "gaming the system" and taking money out of the wallets of ordinary citizens.

"This Wall Street bailout was the single biggest act of theft in American history," Perry told about 60 voters at a Pizza Ranch restaurant in Manchester. "And Newt and Mitt, they both were for it. That's one of the reasons that I say that if you really want an individual who is an outsider, who has not been engaged in that process up, there, I hope you will take look at me."

Most of the $700 billion loaned to the big Wall Street banks through the Troubled Asset Relief Program, or TARP, has been re-paid.

Perry is trailing both Gingrich and Romney in Iowa polls, but his numbers here are trending slightly upward as he makes a late retail-oriented campaign push and takes aim at his GOP opponents.

Growing up as the son of farmers in Paint Creek, Texas, Perry said he learned an early lesson: "Nobody was going to bail out a dry land cotton farm."

"We need to make the decision not to settle for a candidates who support bailouts and these wasteful earmarks," he said. "That needs to be what this election is really about."

Perry is also making stops in Dyersville and Dubuque on Monday.

He will be joined on the campaign trail Tuesday in Iowa by one of his top supporters, Louisiana Gov. Bobby Jindal.