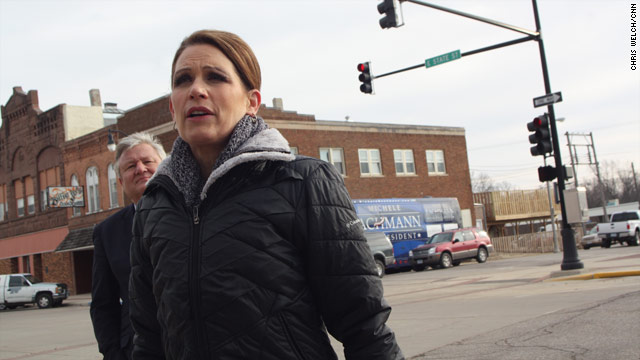 Waterloo, Iowa (CNN) – Republican hopeful Michele Bachmann seems to have found a new favorite tag line in the midst of her bus tour: “I'm one of you.”

It's a phrase she's been using more and more, and Monday she seemed to be saying it everywhere she went.

"I am not a politician. I am a real person. I don't even know how to be a politician," Bachmann said in a news conference outside a high school in Grundy Center, Iowa.

"That is why I am in trouble all the time in Washington DC because I am constantly fighting the establishment in Washington, D.C.," she added.

At her next stop–a bar and grill in Allison, Iowa–the candidate was asked if she would sign the recently opened establishment's wall with a white marker.

Bachmann's in the whirlwind process of touring all 99 counties in the state of a Iowa–a state crucial to her bid for the presidency.

It's also a state that she–at least in her public events of late–appears confident she'll win.

"After this last one (debate) it's like a light switch got turned on," she told a voter in Iowa Falls. "You just can't believe it. We've been zooming up in the polls right now. I mean we think we're gonna take this on the 3rd."

"About 60% are undecided. We are perfectly positioned to win," she added.

Among the undecided caucus-goers present at her meet and greet in Iowa Falls, where she shook hands but didn't take questions, was Janice Hanus.

Hanus says she'd love to vote for a female candidate and says Bachmann's debate performances have pleasantly surprised her.

At this point, though, she's leaning toward Mitt Romney because of his business background. But she admits it's a tough decision.

"I like how (Bachmann) is for the family and had 23 foster children," Hanus said. "Maybe Romney (should-sic) ask her to run as VP."

Bachmann is continuing her tour Tuesday as she approaches the eastern border of the state.