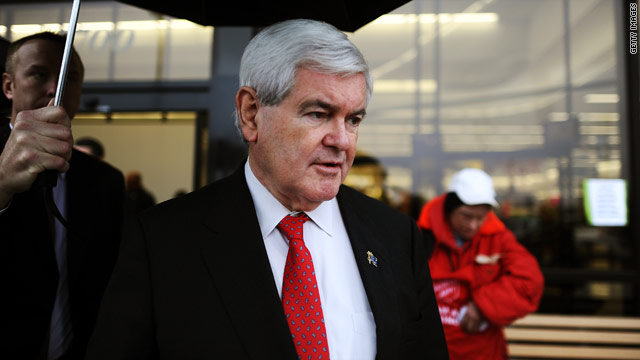 Mount Pleasant, Iowa (CNN) – A couple Iowans weren't afraid to tell Newt Gingrich what they thought of him during his first campaign stop Tuesday at a local Hy-Vee grocery store.

Thirty-one-year-old Jenny Taylor is a "big fan" of the former House speaker but she doesn't think the Republican presidential candidate conveys enough humility.

"No, I don't. First of all, I work really, really hard and I need your help. I say that to everybody. I'm aware that I can only lead if people in fact want to be a part of where we are going. So I try very hard to reach out," Gingrich said.

The former speaker said he is assertive and added, "Sometimes when you're a little bit too assertive it's not too smart."

Their frank conversation followed a question and answer session with people inside the packed cafe area of the store.

Mount Pleasant resident Taylor stood up and told Gingrich she thought it was presumptuous of him to declare weeks ago during an ABC interview that he was going to be the nominee. Gingrich has since walked away from that comment.

"I used to be an analyst at Fox and every once in a while a reporter will ask me an analytical question and I'll forget I'm not an analyst, I'm a candidate," Gingrich said. "This will be decided by the American people, this will not be decided by any one person and that's what I should have said, and I wasn't very clever."

Taylor told reporters she wants to vote for Gingrich but is considering Mitt Romney, who her husband Ryan supports. They're worried Gingrich will not be able to "win the hearts of the American people."

Taylor said of Gingrich, "I'm voting for him with my heart but Mitt Romney's in the back of my head."

After their conversation, the former speaker thanked Taylor for her honesty. He worked the room signing autographs and asking people for their help and for their vote.

Just inside the grocery store next to Christmas displays, Tom Sorensen of Iowa City confronted the White House hopeful.

"We shook hands, I looked him in the eye and told him what I thought," said Sorensen, who called Gingrich an obscene name.

Sorensen, who is not sure who he's going to vote for, said he thinks Gingrich "represents everything that's bad about politics."

Gingrich, calmly said to him, "Well, luckily it's a free country" and moved onto the next handshake and plea for another vote.