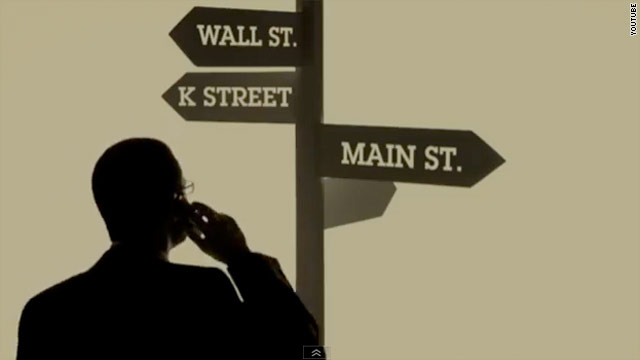 The 30-second ad, not yet trafficked to television stations but released on the campaign's website, linked former Massachusetts Gov. Mitt Romney with "Wall Street" and former House Speaker Newt Gingrich with "K Street."

But which street best describes Perry?

"Main Street," the narrator said, talking about the Texas governor. "The outsider who sparked the creation of a million new jobs. He'll overhaul Washington and toss out the corrupt insiders."

Earlier in the spot, titled "Three Streets," the narrator pinned Romney for his ties to corporate America as a former bank executive and supporter of the bank bailouts.

The ad comes one day after Perry blasted Romney and Gingrich on the campaign trail in Iowa for backing the more than $700 billion federal loan to Wall Street banks, or what Perry called "the single biggest act of theft in American history."

"Mitt Romney: Wall Street," the voice said. "He made millions buying companies and laying off workers."

The ad also spotlighted Gingrich's $1.6 million paycheck received as a consultant for Freddie Mac before the mortgage giant collapsed.

"Newt Gingrich: K Street, the lobbyist hangout in Washington," the narrator said. "Newt got rich, made millions off of Freddie Mac."

His work for the agency has been fodder for multiple attacks against Gingrich since he began rising in the polls. Opponents have accused him of lobbying for Freddie Mac, but the former speaker staunchly denies the claims.