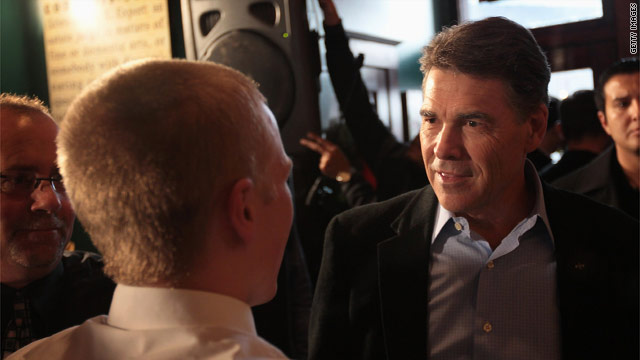 DeWitt, Iowa (CNN) - Republican presidential hopeful Rick Perry has been calling himself a Washington outsider for weeks now, and he vowed Tuesday to hammer that message as his closing argument before Iowans head to the Republican caucuses on January 3.

The strategy, he said, offers a clear contrast between himself and two of the frontrunners in the Iowa race, former House Speaker Newt Gingrich and former Massachusetts Gov. Mitt Romney.

"Newt has been on the inside," the Texas governor told reporters in DeWitt, Iowa. "He is practically the grandfather of earmarks."

Perry painted Romney as beholden to Wall Street and said he "has a real problem" explaining his past support for health insurance mandates.

Perry made the comments after touring the eastern Iowa town with one of his leading campaign surrogates, Louisiana Gov. Bobby Jindal.

The neighboring governors glad-handed their way in and out of shops and restaurants in the town's cozy commercial district, trailed by a mob of reporters and television cameras.

Perry and a super PAC supporting his campaign have been running television ads and distributing mailers attacking both Gingrich and Romney, and the governor himself has been criticizing the two at stop after stop during a statewide bus tour.

He said he did not believe that the tenor of the race has become too negative, something Gingrich has suggested throughout the last week after he became the chief target of his GOP foes.

"I have run a lot of races before, and so long as no one is misstating the facts, then I don't consider that to be negative," he said.

He also said his goal is to win the caucuses and not just land in the top three - a finish that most Republicans agree is needed for Perry to advance in the presidential race.

"My expectation and my intent is to be number one," he said.

Near the end of his session with reporters, Perry was pressed for his thoughts on President Barack Obama by Kalle Eko, a Northwestern University and Chicago native.

When Perry called Obama an "abject failure" on the foreign policy front, Eko responded that the president deserves praise for the killing of Osama bin Laden.

"I would suggest to you that it was Navy SEALs and our intelligence community that was the reason bin Laden was taken out, not the President of the United States," he said.

Asked again by CNN if he believed that the president should be given some share of the credit for bin Laden's death, Perry answered: "I'm almost positive it was Navy SEALs."