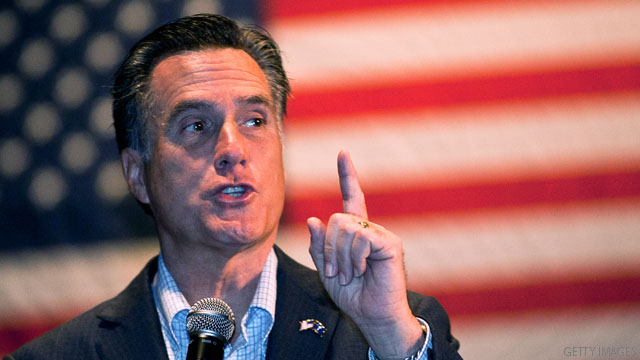 Romney: Super PACs are a 'disaster'

(CNN) – Former Massachusetts Gov. Mitt Romney had a few complaints Tuesday about his GOP rival for the 2012 Republican presidential nomination and the super PAC spending that has garnered increased attention during this election cycle.

Romney called super political action committees a "disaster" and said they should be abolished. Super PACs can receive unlimited, undisclosed contributions as long as they do not coordinate with official campaigns.

"Campaign finance law has made a mockery of our political campaign season," Romney said on MSNBC. "We really ought to let campaigns raise the money they need and just get rid of these super PACs."

Romney also took aim at Gingrich, who he said was the original supporter of a federal mandate for health care.

Asserting that he's "demonstrated a conservatism that people want to see," Romney claimed the idea of an individual mandate for health care came "from Newt Gingrich and the Heritage Foundation."

"They were talking about a federal mandate, I opposed a federal mandate from the very beginning," Romney said while defending his action as governor of Massachusetts when he overhauled health care and included a statewide individual mandate for residents.

Romney scoffed at the idea that Gingrich is the more conservative candidate in the race, criticizing Gingrich for picking up "the narrative of Barack Obama and the DNC" and going on the "attack against free enterprise" by openly questioning Romney's record at Bain Capital.

Gingrich and Romney have engaged in a back-and-forth about money earned in prior positions, with Romney suggesting Gingrich give back funds he earned as a consultant with Freddie Mac. Gingrich's retort: Romney should do the same with funds earned from Bain Capital.

And although Romney admitted the former House Speaker "has done a lot of things for the conservative moment," the businessman also accused Gingrich of siding with liberals on important conservative issues.

Both candidates are in a statistical dead heat for the top spot in a recent CNN/ORC International poll measuring national support, but Romney said he's satisfied with his performance thus far.

"I'm happy with the fact that I've been either at the top or next to the top," he said. "To be able to be steady through this and build some support over time has been good."

He attributed his positive outlook to lessons learned as a Mormon missionary in France.

Calling his time abroad "a dramatic experience" - in part because he "came from a family that was prosperous" and "found himself in a lower income house," - Romney also said he learned about rejection and eventually became "less concerned about how other people thought of me."

"In five months we knocked on doors from morning until late evening. We didn't convert one person in five months," he said. "So if you understand rejection … you don't measure your success by how other people react."