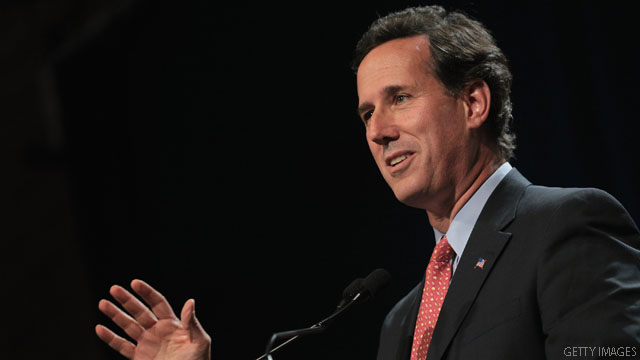 Urbandale, Iowa (CNN) – In explaining their Tuesday endorsement of Rick Santorum, two top Iowa evangelical leaders essentially said they hope other Republican presidential hopefuls will end their campaigns - and coalesce around one candidate.

"What I would say instead of 'drop out' is to say, 'Why can't the top three or so pro-family candidates come together and figure out who has the talents for president, who has the talents for other roles within the federal government whether its attorney general, secretary of state, vice president, health and human services secretary?" said Chuck Hurley, vice president of the Iowa-based Christian group, The Family Leader.

The group's president and CEO, Bob Vander Plaats, echoed a similar sentiment. The Family Leader holds sway over many evangelicals in Iowa – a key voting bloc in the Jan. 3 caucuses.

"Our fear all along was that the conservatives would fragment their vote … We believe Rick Santorum is the best one to launch out of Iowa right now," Vander Plaats added.

The Family Leader did not, as a group, endorse Santorum. Instead, both men explained they were allowed to personally give the candidate their nods.

Santorum responded to the announcement after an event in Mt. Pleasant, Iowa, saying the it is evidence his campaign "is the one with the momentum."

"I think they have the confidence that we can carry the conservative message on all fronts into this Republican primary and take on the moderates, [Newt] Gingrich and [Mitt] Romney and have a conservative alternative," Santorum said.

Vander Plaats laid out the reasons for his backing. He praised the candidate's worldview and family values. Vander Plaats also cited Santorum's two Senate victories in Pennsylvania as improving his chances of winning there - and in neighboring Ohio - should Santorum win the GOP nomination.

Meanwhile, both men acknowledged the anger that their endorsement might cause among their fellow Christian conservatives.

"I do regret that one erstwhile friend and culture warrior has threatened to 'Burn Bob's body, drag it through the streets, and hang it from a bridge,' if Bob doesn't endorse who that person wants him to endorse," said Chuck Hurley, vice president of The Family Leader.

"Today I want to extend an olive branch to any and every overheated former friend in this movement," Hurley added.

When pressed to name the source of those comments, Hurley would not say.

Vander Plaats acknowledged he personally spoke with some candidates to gauge their willingness to rally around one person. He would not say what responses he received.

"I'm not going to get into the conversations. But that's up to them," Vander Plaats said.

He added that he would also consider a team that did not place Santorum at the top, if some candidates collectively decided on it.

Reporters pressed both men on who they would like to drop out.

"I refuse to take a swing at somebody and diminish what they think is their God-ordained role," Hurley said.

Gingrich, upon learning of the endorsement during a campaign stop in Iowa, said he was not disappointed.

"Obviously you'd like to have everyone," the former House speaker told reporters. "People have to do what they think they can do."

Republican presidential candidate Michele Bachmann released a statement after the personal endorsements. It cited other Iowa faith leaders, who support Bachmann, praising The Family Leader's decision against endorsing a candidate as an organization.

Yet the statement added that Bachmann "has met every criterion that The Family Leader has established. Iowans of faith know that Michele Bachmann, more than any other candidate in the race, can be counted on to defend and encourage the traditional, Christian values that made our country the greatest nation on Earth. She remains completely deserving of the Family Leader's full endorsement."

Fellow candidate and Texas Gov. Rick Perry said he was not surprised The Family Leader refrained from endorsing a candidate.

"I expected them to stay neutral," Perry said at a press availability in DeWitt, Iowa. "You have a number of serious conservatives in the race, both social and fiscal conservatives. Rick Santorum, Michele [Bachmann] and myself."

When asked about Mitt Romney, Vander Plaats reiterated his criticisms of the former Massachusetts governor for spending far less time campaigning in Iowa compared to his GOP rivals.

Yet when asked if he would support Romney should he win the GOP nomination, Vander Plaats said: "We'll probably fully get behind to defeat [President] Barack Obama."

Recent polls for Iowa have consistently shown Santorum near the bottom of the pack, suggesting he is struggling to connect with voters in the crucial caucus state.