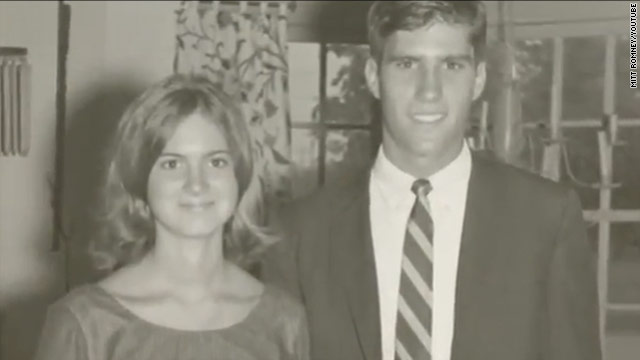 (CNN) – Mitt Romney's better half talks up the strength of his character in a new television ad airing in Iowa.

But it's clearly a not-so-veiled Romney campaign swipe at Newt Gingrich's marital infidelity during his previous two marriages.

Ann Romney will tell audiences to look at how presidential candidates have "lived" as an indicator of how they'll lead as president in the spot beginning Friday.

"You can never predict what kind of tough decisions are going to come in front of a president's desk," the wife of former Massachusetts Gov. Mitt Romney says.

"But if you can trust they will do the right thing, and maybe the hard thing, and maybe not the popular thing, and if you really want to know how a person will operate, look at how they've lived their life," she continues, as black-and-white family photos of the Romneys and their children appear.

The 30-second ad titled "Character" is scheduled to air from Friday into next week, as 2012 GOP candidates ready for the first presidential nominating contest Jan. 3. The nation's first caucus will be held in Iowa, a state containing an influential group of conservative voters who place a priority on family values.

Ann Romney has stepped up her solo campaigning on the primary campaign trail recently as Gingrich climbed in the polls nationwide as well as in Iowa, putting her 42-year marriage to the GOP contender front-and-center in the race.

The spot closes with a shot of the two walking hand-in-hand.

Ann Romney testified to her husband's character and integrity as she introduced Romney at a town hall in Hanover, New Hampshire Wednesday. She told employees at a steel plant her husband had always been a "reliable" man, using language similar to Mitt Romney's description of the former House speaker as "unreliable."