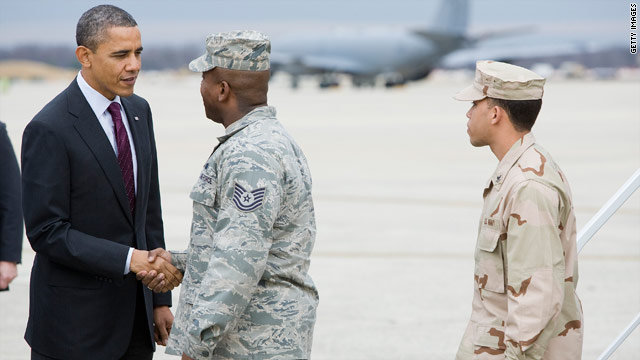 (CNN) – Most Americans agree with the decision to end the war in Iraq, according to a CNN/ORC International poll released Wednesday. Almost eight in ten said they support removal of combat troops from that country by the end of this year.

And although 96% are proud of U.S. troops who served in Iraq, just one in three consider the war a victory and more than half call it a stalemate.

President Obama announced the full withdrawal of troops from Iraq by the year's end in October. Now, two-thirds say they oppose the war and more think the U.S. made a mistake sending troops to Iraq in the first place 53% to 46% over those who do not think it was a mistake.

Americans are similarly divided over whether they agree with then-Sen. Barack Obama's opinion that it was a "dumb" decision to send troops to Iraq in 2003 - 51% say it was dumb and 45% say it was smart.

More than half think the Bush administration deliberately misled the American public about whether Iraq had weapons of mass destruction, but about half say U.S. involvement in the war has had a positive effect on life in Iraq.

When it comes to the U.S., half the nation believes the Iraq war had a negative effect on life here and seven out of 10 say the money spent on the war is one reason for the economic problems facing the country today.

"After the Vietnam war, commentators noted a wariness among the U.S. public to support the use of military force, dubbing it the 'Vietnam syndrome,'" said CNN Polling Director Keating Holland. "Roughly half the public believed that war was an outdated way of settling international conflicts even into the 1980s, but only 32% of Americans feel that way today, with 66% saying that war is sometimes necessary - a minority view after Vietnam. At the same time, seven in ten believe that U.S. military force should only be used as a last resort, and that may be the more lasting impact on public opinion of the war in Iraq."

Almost four in ten American say the U.S. only accomplished some of its goals in Iraq, but almost eight in ten say we could not achieve any more no matter how long troops remained in that country.

The CNN poll was conducted by telephone by ORC International from Dec. 16 to Dec. 18, among 1,015 adult Americans questioned by telephone. The survey's overall sampling error is plus or minus three percentage points.