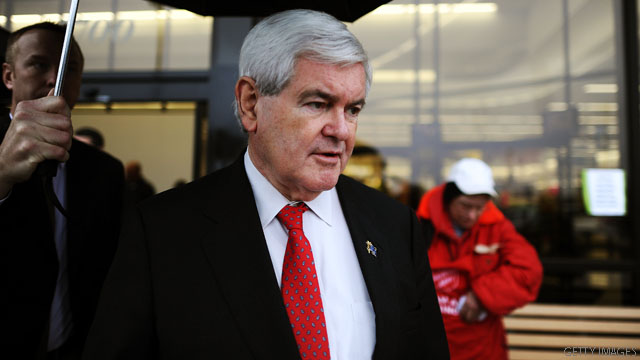 The former House speaker was formally announcing the support of Iowa House Speaker Kraig Paulsen and New Hampshire House Speaker William O'Brien with both men at the Iowa State Capitol Wednesday morning when he was interrupted.

An Occupy Des Moines protester, who was sitting just a few feet behind Gingrich's left shoulder, visibly startled the former House speaker and others in the small room when he yelled "mic check."

Three others immediately began calling Gingrich the "corporate one percent candidate" and chanted "put people first" as they were escorted out of the room by security staff.

"I think of all the candidates we've had, I have a fairly long record of being able to talk with a very wide range of people," Gingrich said, after telling Grooters he would be happy to speak to him after the press conference.

The protesters heckled Gingrich as he and his wife Callista made their way through the capitol building to his car.

One woman involved with Occupy Des Moines said they intend to target all the presidential candidates. She told reporters that various factions of the Occupy Wall Street movement will be descending on Des Moines next week to occupy candidate's headquarters.

Gingrich is just one of the candidates that have received similar treatment during this election cycle. A similar scenario played out last week during a speech he delivered in Iowa City, Iowa.