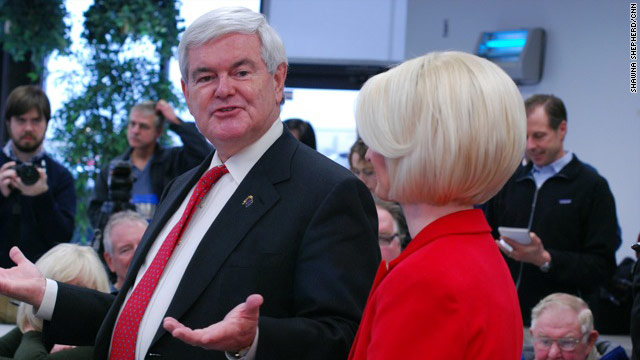 The independent expenditure committee in question, Restore Our Future, is spending millions on television, radio and mailer pamphlets supporting Romney and attacking the former House speaker.

Under the Supreme Court's  2010 Citizens United ruling, Super PACs can receive unlimited contributions as long as they do not coordinate with official campaigns. Gingrich assailed Romney who abdicated responsibility for Restore Our Future’s negative advertisements, saying he’s “not allowed to communicate with the super PAC in any way shape or form” in accordance with the law.

The former speaker dismisses that argument, telling reporters in Ottumwa, “I have a simple challenge for Gov. Romney. This PAC was created by his former staff and funded by his personal buddies. If he wants to stop it, he can say it publicly.”

A spokesman for the Romney campaign declined to comment.

Gingrich has his own super PAC, Winning Our Future run by former staffers, including spokesman Rick Tyler who defected from Gingrich’s campaign when a number of other staffers left in June. The former speaker insists if he wants to influence the pro-Gingrich super PAC he can do so legally through public statements.

Romney’s super PAC is planning on spending $1.4 million next week leading up to the first nominating contest on Jan. 3, according to Gingrich, which he claims is “more than we’ll spend in the whole campaign in terms of Iowa.”

“I don't object to being outspent. I object to lies. I object to negative smear campaigns, and I object to things that the candidate himself refuses to support,” Gingrich said, in Ottumwa, criticizing the former governor for disassociating himself from the independent super PAC that is producing negative ads on his behalf.

"(T)hese are his people doing his ads, doing his dirty work while he pretends to be a above it,” said Gingrich.