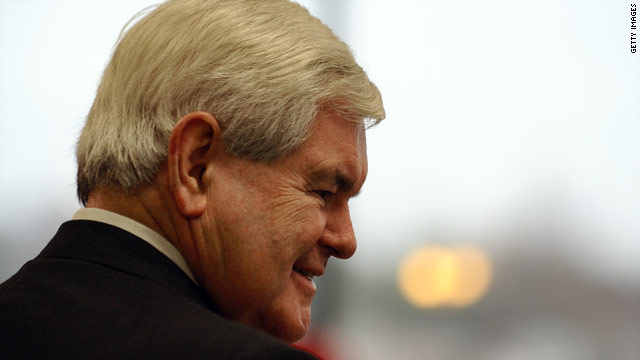 Poll: Gingrich edges Romney in Virginia (but can he get on the ballot?)

The results come the same day Gingrich travels to Virginia to try and collect the 10,000 signatures needed to secure a spot on the ballot for the state's Republican primary on Super Tuesday - March 6.

"We're going to make it. It's going to be exciting." Gingrich said Tuesday at a campaign stop in Iowa, just one day after telling reporters on Monday that his campaign "may barely make it" by Thursday's deadline.

The survey, conducted by the Quinnipiac University Polling Institute, shows the former House speaker with a 30% to 25% advantage over Romney, a margin that falls within the sampling error.

Coming in third, Texas Rep. Ron Paul was the top choice for 9% of Republicans in the state, with no other candidate polling higher than 6%.

While Virginia doesn't hold its primary until March, the commonwealth could prove an influential player in the nominating process should the contest become a heated battle between leading candidates.

According to the poll, Gingrich polls even higher against Romney in a head-to-head matchup, with a 47% to 39% margin.

But in hypothetical contests with President Barack Obama, Romney fares better than his Republican rival. The former Massachusetts governor takes in 44% of support among all voters to Obama's 42%, while Gingrich trails Obama by a 46% to 41% margin in favor of the president.

As he attempts to shore up more support in the Old Dominion, Gingrich will hold a campaign rally in Arlington, Virginia on Wednesday night, with more stops on Thursday.

Quinnipiac surveyed 1,135 registered voters by telephone from Dec. 13-19, with a sampling error of plus or minus 4.4 percentage points.