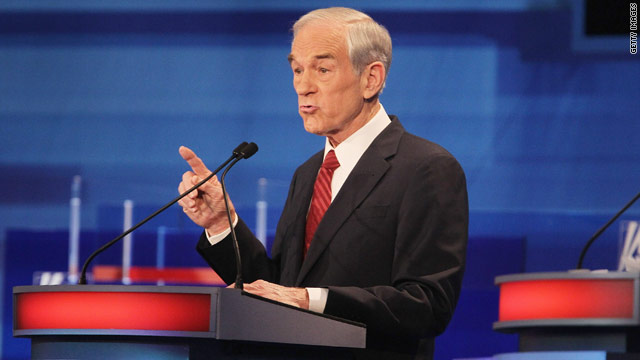 (CNN) - With 13 days to go until the Iowa caucuses, a new poll indicates that Rep. Ron Paul of Texas sits atop the field of Republican presidential candidates in the state that holds the first contest in the primary and caucus calendar.

According to an Iowa State/Gazette/KCRG survey released Wednesday, 28% of likely Iowa GOP caucus goers say Paul, the longtime congressman who's making his third bid for the White House, is their first choice for the Republican nomination, with 25% backing former House Speaker Newt Gingrich. Paul's three point margin over Gingrich is well within the survey's sampling error.

The poll was conducted over a long period of time, starting on Dec. 8 and ending on Dec. 18. The survey indicates that with the caucus closing in, the battle for Iowa remains fluid, with only 28% saying they've definitely decided on which candidate they would support.

But the survey suggests that when it comes to the commitment of support, Paul may have an advantage.

"What our poll says is that 51% of Paul's supporters say they're definitely backing him," said James McCormick, professor and chair of political science at Iowa State and coordinator of the poll. "The percentage for the next two candidates is much weaker, at 16.1 for Mitt Romney and 15.2 for Newt Gingrich."

The Iowa State/Gazette/KCRG poll was conducted by telephone, with 333 likely Iowa GOP caucus goers questioned. The survey's sampling error is plus or minus five percentage points.