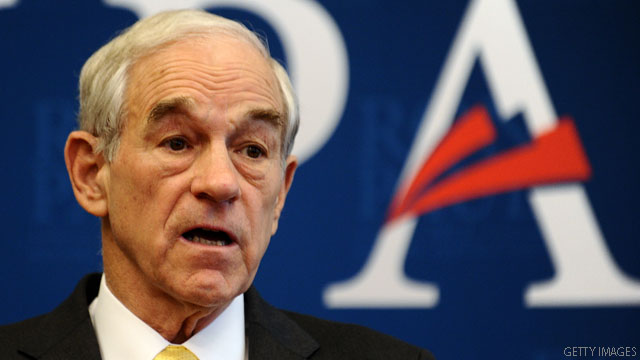 When asked during an interview with CNN Chief Political Analyst Gloria Borger whether he looked at them when they were published and decided they did not represent him accurately, he said "not all the time." Pressed on whether he read them he said, "Not all the time. Well, on occasion, yes."

Paul, who had left Congress at the time and was practicing medicine, has repeatedly disavowed the controversial remarks in the newsletters.

"I've never read that stuff. I've never read - I came - I was probably aware of it 10 years after it was written and it's been going on 20 years that people have pestered me about this and CNN does it every single time," he said.

Among the racially charged comments contained in the publications was this one from 1992: "Order was only restored in L.A. when it came time for the blacks to pick up their welfare checks." They also contained some conspiracy theories.

When Borger asked him if this was a legitimate topic, he became testy saying "Yeah and when you get the answer, it's legitimate that you sort of take the answers I gave. You know what the answer is? I didn't write them, didn't read them at the time, and I disavow them. This is the answer."

Existence of the controversial newsletters, which listed Paul as publisher and carried such names as "Ron Paul's Freedom Project," the "Ron Paul Political Report," the "Ron Paul Survival Report" and the "Ron Paul Investment Letter," got renewed attention in 2008 by a story in the New Republic and was followed up on by the Weekly Standard.

Paul can expect more scrutiny with the news he is at the top of some polls in Iowa, less than two weeks before the Jan. 3 caucuses.

During a swing Wednesday, he drew large crowds and enthusiastic responses to his anti-establishment message and calls for fiscal restraint.

Paul's campaign has hit Newt Gingrich hard in campaign commercials accusing him of "serial hypocrisy" for changing positions and using his influence to help build his consulting business.

When CNN asked him whether he would be willing to take down these ads because many Iowans have voiced displeasure with the negative nature of this year's campaign he said he would not.

"I don't consider them attacking him unfairly. I mean, it just points out the position he's been on. That's my job, to show what my opponents do. They flip-flop around and they change positions, and if the media won't do it, I should do it," he said in the interview.