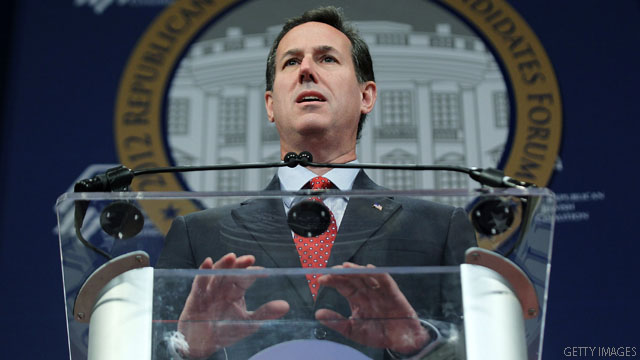 Santorum: Faith leader asked me, others to consider dropping out

Fairfield, Iowa (CNN) - Prior to making his endorsement, influential Iowa conservative Bob Vander Plaats approached Rick Santorum and asked him to consider dropping out of the Republican presidential race, the candidate said Wednesday.

CNN first broke the news Tuesday evening that Vander Plaats, the president and CEO of The Family Leader, asked Michele Bachmann to consider dropping her bid or joining forces with another candidate.

On Wednesday, Santorum, the former Pennsylvania senator, also said he understood Rick Perry and Bachmann were approached by Vander Plaats.

Although The Family Leader did not make an endorsement, Vander Plaats announced his personal support of Santorum Tuesday. His efforts prior to the announcement have been the focus of much attention, including from a questioner at a Santorum town hall in Fairfield, Iowa.

"There are reports that Vander Plaats asked Bachmann to either dramatically change or drop out of the race," the questioner said Wednesday. "If that's true are you willing to disavow those actions by Bob Vander Plaats?"

Santorum did not directly address whether he would disavow anything and instead told the questioner he was the recipient of a call similar to the one Vander Plaats had with Bachmann.

"As a matter of fact, not only Bob Vander Plaats but a lot of people were calling me asking me to do the same thing," Santorum said.

Santorum told CNN after his event that he last spoke to Vander Plaats "over the weekend" and that conversations like the one in question happened for several weeks.

He said Vander Plaats and the other individuals - he would name the others he said were trying to encourage the same thing - were part of a "movement" that in recent weeks began encouraging him, Texas Gov. Perry and Minnesota Rep. Bachmann to "consider getting out of the race and supporting one or the other."