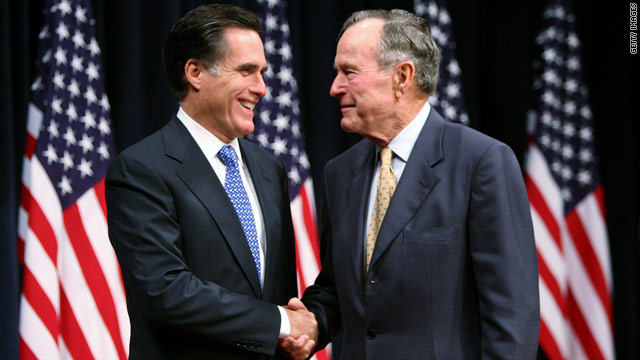 "I had no idea that was coming," Romney said, adding he thought of Bush as a "hero."

Romney's comments came after Bush told the Houston Chronicle the former Massachusetts governor was the "best choice" for the 2012 Republican nomination.

The Texas newspaper noted Bush's support did not constitute an official endorsement. Bush and his family live in the state of another presidential hopeful, Texas Gov. Rick Perry, complicating the notion of a full-scale endorsement.

In the interview with the Chronicle, Bush explained why he wasn't backing Perry.

"I like Perry, but he doesn't seem to be going anywhere; he's not surging forward," Bush said.

He also added: "I've got to be a little careful, because I like Perry; he's our governor."

"I just think he's mature and reasonable – not a bomb-thrower."

Bush met with Romney as recently as the beginning of December, when the candidate visited the former president and his wife Barbara at their home near Houston. At the time, Romney aides said the trip wasn't meant to secure an endorsement, noting the two politicians were long-time friends.

On Thursday, Romney's spokeswoman Andrea Saul wrote on Twitter the candidate called Bush to thank him for his support.

At his New Hampshire event, Romney said he thanked Bush "for his support, his leadership, his heroic life, and his friendship."

–CNN's Rachel Streitfeld and Kevin Liptak contributed to this report.