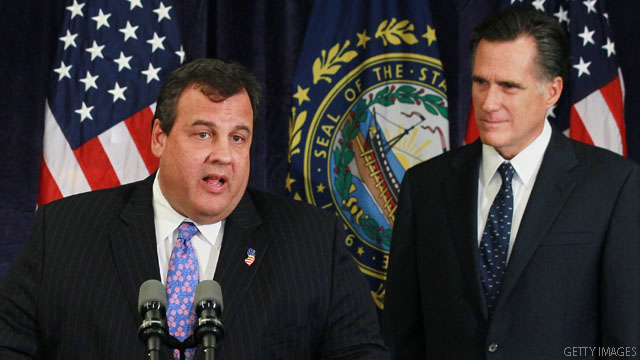 Christie, who endorsed Mitt Romney after deciding against a White House bid of his own, did not rule out the No. 2 spot, but predicted he will still be governor in 2012.

"The fact is, if Gov. Romney comes to me and wants to talk to me about that, we'll have a full conversation about that and then Mary Pat and I will make that decision about what we want to do with our future," Christie said on Fox News Thursday. "But my view is, I think if you fast-forward the tape to a year from now it's going to be President-elect Romney and some other VP-elect and Chris Christie, the governor of New Jersey."

The first-term governor said it may be too early in the nominating process to discuss potential running mates, adding that there will be "plenty of time for that once he sews up the nomination."

Questions about his next political step have followed Christie since he decided "now is not my time" to run for the White House.

During a press conference in October, the often-blunt Christie reiterated the line that his temperament might prove difficult for the role of vice president.

"There are certain personalities that are appropriate for being vice president. I don't know that mine fits in that particular mold," Christie said.

During the same interview on Fox, his wife Mary Pat said she had personal concerns about her husband running for national office.

"I am really supportive of what Chris wants to do, but from a personal perspective I wasn't crazy about making that sacrifice at this time in our lives," she said, referring to Christie's October decision. "Our youngest child's eight, so … but at the end of the day if it is was the right thing to do I would have been happy to be on board."