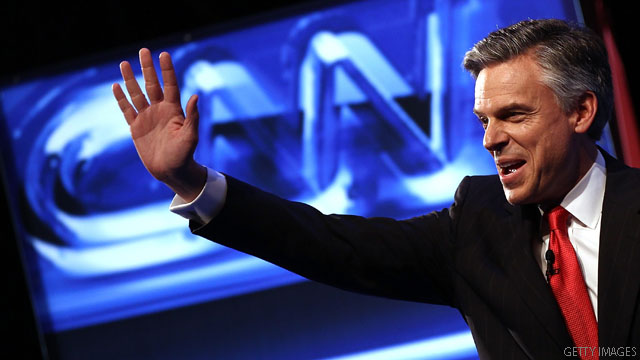 (CNN) – A major New Hampshire newspaper backed Jon Huntsman for the Republican nomination Thursday, painting him as the only consistent conservative in the race for the White House.

To seemingly prop up Huntsman, the editorial board of the Concord Monitor hit Newt Gingrich and Mitt Romney, the two frontrunners in the first-in-the-nation primary state, as unpredictable.

"With Gingrich, voters would get an unpredictable, unprincipled nominee and, should he be elected, a white-knuckle four years of an imperial presidency," the editorial read. "With Romney, they wouldn't know who they would get."

Although the paper said they disagree with Huntsman on issues including abortion and civil unions, they wrote that he would provide the brand of leadership, especially on fiscal issues, needed in the United States and present the "greatest challenge to [Barack] Obama."

"If elected, he would provide mature, informed and steady leadership," the paper wrote. "Huntsman's depth of experience, maturity, sincerity and ability to work toward a common goal with political opponents make him the Republicans' best choice to face President Obama in 2012."

It also lauded Huntsman for serving as U.S. ambassador to China under President Obama, a sticking point for conservatives in the candidate's record.

"Such willingness to put the good of the country over party considerations is exactly what's missing in politics today," the editorial read.

Despite his low standing in national polls, Huntsman has focused his energy on the Jan. 10 New Hampshire primary, hoping a high finish in the Granite State will propel his candidacy.

The editorial page of the Monitor published an anti-Romney endorsement during the last presidential cycle, during the former Massachusetts governor's first bid for the GOP nomination. The state's leading paper, the New Hampshire Union Leader, threw their support behind former House Speaker Gingrich last month.