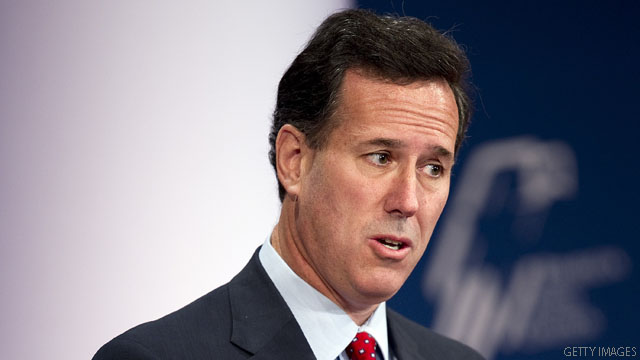 Des Moines, Iowa (CNN) - One of the most influential Christian leaders in Iowa told Republican presidential candidate Rick Santorum "he needed money to promote the endorsement" of the candidate, Santorum told CNN on Wednesday.

The conversation between Santorum and Bob Vander Plaats, president and CEO of the Iowa-based The Family Leader, happened before Vander Plaats personally endorsed Santorum on Tuesday.

"What he talked about was he needed money to promote the endorsement and that that would be important to do that," Santorum said, referring to Vander Plaats.

Yet the candidate added: "There was never a direct ask for me to go out and raise money for it."

The candidate spoke to CNN after a campaign event in Fairfield, Iowa. It appears to be his first detailed, public comments on the issue that was first reported by The Des Moines Register on Tuesday.

The candidate said he last spoke with Vander Plaats over the weekend.

On Tuesday, Vander Plaats personally endorsed Santorum. The Family Leader did not endorse a candidate as an organization.

The group holds sway over many Iowa social conservatives. Vander Plaats' personal nod is among the most coveted among candidates seeking support from those conservatives – a crucial voting bloc in the state's Jan. 3 caucuses.

The Register quoted Vander Plaats saying in a phone interview: "That's part of our ethical responsibility. You can't say, 'We endorsed you. Now see you later.' That's not going to do a lot in the long run."

CNN pressed Santorum on exactly what Vander Plaats asked for.

"He didn't say, 'Well I need X dollars from you' or anything like that. No," Santorum said.

Wednesday morning, during an interview with CNN's "American Morning," Vander Plaats said he did not directly ask Santorum for money.