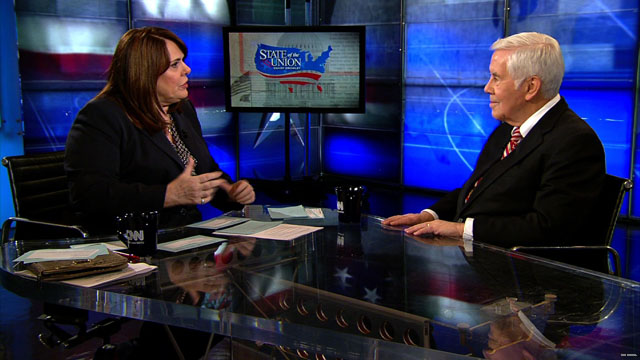 (CNN) – Republican Sen. Dick Lugar said Sunday Republicans should support his candidacy if they want to hold onto his Indiana Senate seat in 2012.

The six-term senator, who may face a difficult reelection due to a challenge from the right, used recent Republican Senate losses in Nevada and Colorado to expose the flaws in tea party-backed candidates.

"They were people who claimed that they wanted somebody who was more of their tea party aspect, but in doing so, they killed off the Republican chances for a majority," Lugar said on CNN's "State of the Union." "This is one of the reasons why we have a minority in the Senate right now."

He also made the case that his conservative record lends itself to tea party support and drew on his experience speaking before groups in his state aligned with the grassroots movement.

"I have a very conservative voting record over the course of the time I've served," Lugar told CNN Chief Political Correspondent Candy Crowley. "Certainly unique, I think, in the Senate, of having been a farmer, a small businessman, a Naval officer, a mayor, a school board member. These are grassroots functions that people are dealing with."

Lugar pushed back against claims he is one of the most vulnerable senators, saying Republicans will support the candidate most likely to win the seat in the next election cycle.

"A Republican majority in the Senate is very important, and Republicans who are running for reelection ought to be supported by people who want to see that majority," Lugar said. "I think the majority of tea party people understand that, too."

Lugar, an elder statesman in the upper chamber, has been criticized as too moderate. Critics cite votes including those to confirm President Barack Obama's Supreme Court nominees, as well as support for the Wall Street bailout and an arms control treaty with Russia.

When Indiana State Treasurer Richard Mourdock announced his decision to challenge the senior senator, he criticized him for his willingness to work with Democrats.

"To roundly condemn foreign aid for the fact that we are concerned about borders in Afghanistan and Pakistan or what have you, seems to me is really uncalled for," Lugar said.

When asked who he would support for his party's nominee, Lugar only said he favored Indiana Republican Gov. Mitch Daniels, who decided against a bid for the White House earlier this year.

"He would have been a great president," Lugar added.