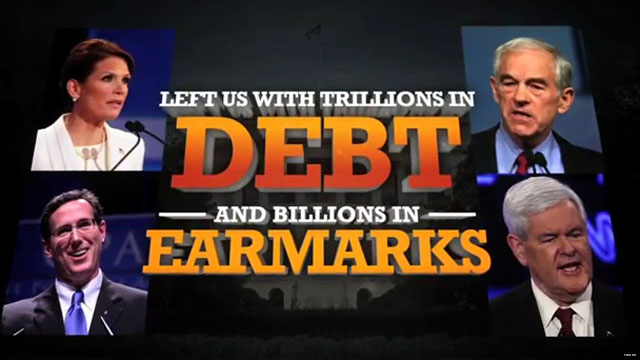 Des Moines, Iowa (CNN) - Rick Perry's presidential campaign says it's going up Monday in the first-in-the-nation caucus state with a new TV commercial that touts the Texas governor's anti-Washington credentials and highlights his calls for a part-time Congress.

The campaign tells CNN the 30-second spot will run state wide in Iowa. It comes eight days before the January 3 caucuses, which kick off the primary and caucus calendar.

The spot also tries to paint some of Perry's rivals for the GOP nomination as Washington insiders.

As the narrator in the ad says, "if Washington's the problem, why trust a congressman to fix it? Among them, they've spent 63 years in Congress, leaving us with debt, earmarks, and bailouts," pictures of former House Speaker Newt Gingrich, Rep. Ron Paul of Texas, Rep. Michele Bachmann of Minnesota, and former Sen. Rick Santorum of Pennsylvania appear up on the screen.

"Congressmen get $174,000 a year and you get the bill. We need a solution," continues the announcer.

The commercial closes with Perry saying "that's the reason I've called for a part-time Congress. Cut their pay in half, cut their time in Washington in half, cut their staff in half, send them home. Let them get a job like everybody else back home has."

Perry first floated his proposal to make Congress "part-time" last month as part of his plans to reform Washington.

The long serving governor jumped into the race for the GOP presidential nomination in mid-August and soon soared to the top spot in the polls, but after numerous stumbles in debates this autumn, his poll numbers sank. Perry has been touting his anti-Washington credentials as he tries to jump start his campaign.

"Gov. Perry is the only Washington outsider in this race. He has never served in Washington or been an establishment favorite," said Perry campaign spokesman Ray Sullivan.