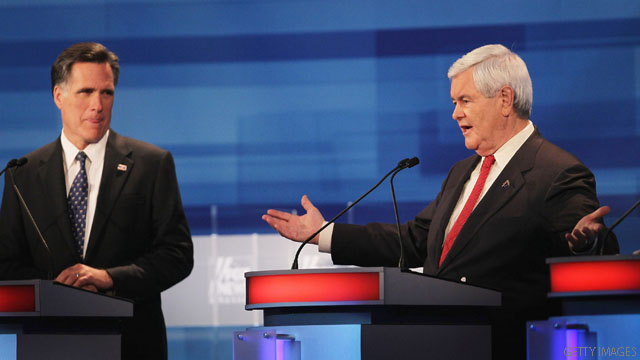 Des Moines, Iowa (CNN) - With one week to go until the start of the primary and caucus calendar, a new national poll indicates Newt Gingrich and Mitt Romney are battling for the top spot in the race for the GOP presidential nomination.

According to a Gallup Daily Tracking Poll released Tuesday, 25% of registered Republicans say they support Gingrich, the former House speaker, for their party's nomination, with 24% backing Romney, the former Massachusetts governor who's making his second bid for the White House. Gingrich's one point margin is well within the poll's sampling error.

The survey was conducted Dec. 20-26 and is the first national poll released since Christmas.

Earlier this month, Gingrich held double digits leads over Romney and the rest of the Republican presidential candidates in Gallup polling and in other organizations' surveys but the latest polls indicate his advantage has disappeared. A CNN/ORC International survey released last week indicated Gingrich and Romney deadlocked at 28%.

According to the new Gallup poll; Rep. Ron Paul of Texas, who's making his third run for the presidency, is at 11%, with Texas Gov. Rick Perry at 8%, Rep. Michele Bachmann of Minnesota at 6%, and former Sen. Rick Santorum of Pennsylvania at 3%, and former Utah Gov. and former Ambassador to China Jon Huntsman at 2%.

While national polls are valuable, they are often not a good indicator of what will happen in the early voting states, like Iowa and New Hampshire. Iowa's Jan. 3 caucuses kick off the presidential primary and caucus calendar, and the latest polls in the Hawkeye state indicate that Paul, Romney, and Gingrich are basically deadlocked for the top spot among likely GOP caucus goers. In New Hampshire, which goes second and holds its primary one week after Iowa, the latest surveys indicate that Romney remains the overwhelming front runner among likely Republican primary voters.