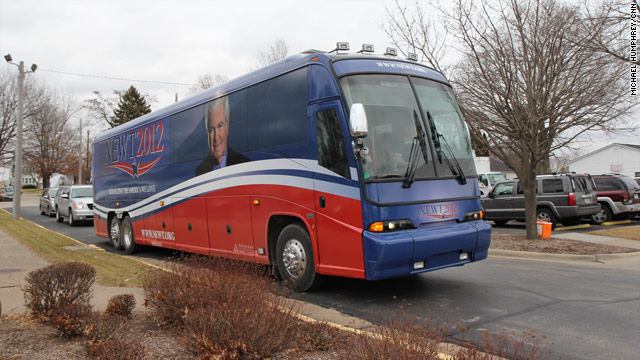 Dubuque, Iowa (CNN) - Newt Gingrich will be crisscrossing Iowa over the next eight days in a bus wrapped in patriotic colors and a large headshot next to his "Newt2012" logo.

The former House speaker is one of five major Republican presidential candidates campaigning in the Hawkeye state leading up to the Jan. 3 caucuses, the first contest in the race for the GOP nomination.

Gingrich, who has lost his frontrunner status in the latest polls of likely Iowa GOP caucus-goers since his last visit nearly a week ago, is expected to visit more than 20 cities across the Hawkeye state.

Gingrich kicks off his "Iowa Jobs and Prosperity Tour" Tuesday in the northwest border city of Dubuque. Every stop appears to be meet and greet-type visits but the former speaker makes informal remarks and takes questions at most campaign stops.