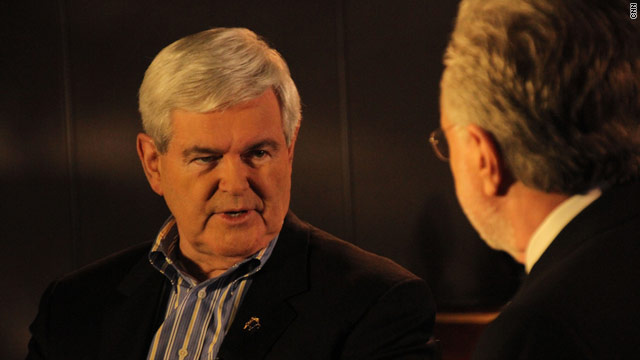 Gingrich: Romney should 'own' negative campaign

(CNN) - Moments after saying that his campaign would not veer into negative messaging, presidential hopeful Newt Gingrich sharply criticized rival Mitt Romney on Tuesday for refusing to condemn television advertising produced by a pro-Romney organization.

"All I'd say, Mitt, if you want to run a negative campaign and attack people, at least be man enough to own it," Gingrich said on CNN's "The Situation Room with Wolf Blitzer."

Romney has said speaking publicly about the ads would violate federal law disallowing coordination between candidates, their campaigns, and super PACs. The ads began airing in Florida earlier this month. But Gingrich cried foul Tuesday, saying the organization, Restore Our Future super PAC, is run by former Romney staff and funded by his "millionaire friends."

Gingrich tore into several of the ad's attacks including that he paid to settle a House ethics investigation and personally profited $1.6 million from mortgage giant Freddie Mac. And he called its portrayal of his immigration position a "gross distortion."

He said polling data which showed him leading the GOP field in recent weeks overrated his support, but nonetheless predicted a strong showing in the Iowa caucuses.

"I think there was an initial artificial burst when Herman Cain got out, and people are re-sorting themselves," he said. "None of us expected me to be in the top two at this point, let alone be the front-runner."

But don't expect a first-place Gingrich finish next week, the candidate said. "I think we're going to be in the top three or four. We could end up as number one. It's a very confusing field right now."