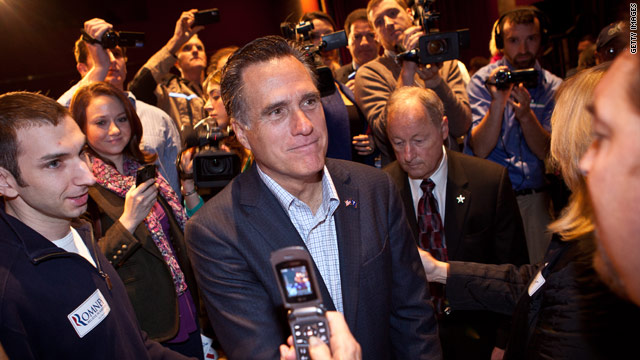 "I think he compared that to Pearl Harbor," Romney said of the Gingrich campaign's failure to get on the Virginia ballot, which the former speaker's adviser called a "set-back."

"I think it's more like Lucille Ball at the chocolate factory," Romney said. "You've got to get it organized."

Gingrich failed to gather the 10,000 signatures required to qualify for his adopted home state's ballot the state party announced over the weekend.

Gingrich's campaign director compared the news to the attacks on Pearl Harbor.

"Newt and I agreed that the analogy is December 1941," said Michael Krull. "We have experienced and unexpected set-back, but we will re-group and re-focus with increased determination, commitment and positive action."

Romney was speaking Tuesday in Portsmouth, New Hampshire, where he boasts a double-digit lead in recent polls. He will kick off an Iowa bus tour Tuesday night.

The classic episode of "I Love Lucy" Romney referenced shows the red-headed comedienne growing increasingly frantic as she tries to package chocolates streaming down a conveyor belt.