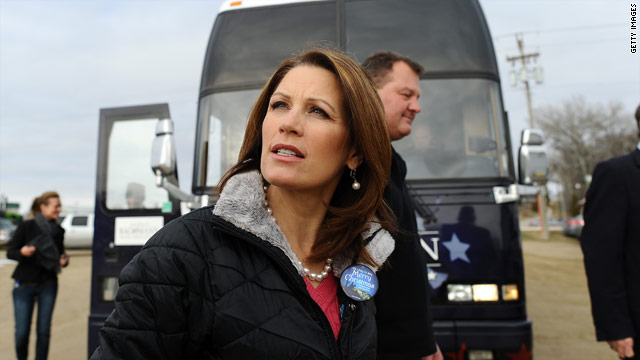 Creston, Iowa (CNN) - Michele Bachmann stressed her national security credentials Wednesday, as she offered sharp criticisms of her opponents over that issue and the issue of foreign policy in general.

The three term Republican congresswoman from Minnesota touted her Washington credentials but at the same stop repeated her mantra that she's as an outsider and "doesn't even know how to be" a politician.

"I'm a member of the House Intelligence Committee and I deal regularly with our nations national security threats," Bachmann told supporters and press outside her campaign bus.

She used that as a means to attack two of her Republican opponents – former House Speaker Newt Gingrich and former Massachusetts Governor Mitt Romney.

Then she turned her focus onto Texas Governor Rick Perry.

"(Perry) doesn't understand the situation in Syria or that there's a difference in security assistance and foreign aid," she said.

She used the topic of Iran, as she has repeatedly, to single out Texas Rep. Ron Paul for "ignoring the warning signs." She said she is "appalled" that Paul would be "fine if the Iranians obtained nuclear weapons."

At an earlier stop in Fairfield, a woman at a diner asked Bachmann what she plans to do about the rise of dictators in Africa, specifically people like Robert Mugabe of Zimbabwe.

Bachmann acknowledged the woman's premise that it was a "huge issue" but cautioned that the US has "limitations" on what it can do in other nations. She said the hostility in Africa is an indirect result of President Obama's policies.

"I think one of the biggest problems that has happened in recent times. Since President Obama came in, he put distance between the United States and Israel, and when that happened it let all of Israel's 22 hostile neighbors know that there was an opening. That's why you saw a rise in hostilities."

Bachmann wrapped up by adding that the US has been a "force of good" in the region in terms of the AIDS crisis.

But the woman asked a follow up, asking specifically whether the US should do something about people like former Ugandan President General Idi Amin or the current Mugabe or if Bachmann just sees it as a "blanket issue."

"We can't go in and solve every problem. That's part of the problem. We have limited resources and I think that's just part of recognizing working with other nations that we can be a force for good but we have limitations."

"I don't want to be overly aggressive either."

At a press conference later, Bachmann was also asked her opinion about the news that Newt Gingrich would not vote for Ron Paul should be become the nominee.

She wouldn't answer whether she'd support Paul or not, just that Paul "won't be the nominee–I will."

She also would not answer two questions relating to how well she has to place in Iowa in order to continue her campaign.

"What we intend to do is very well in Iowa."