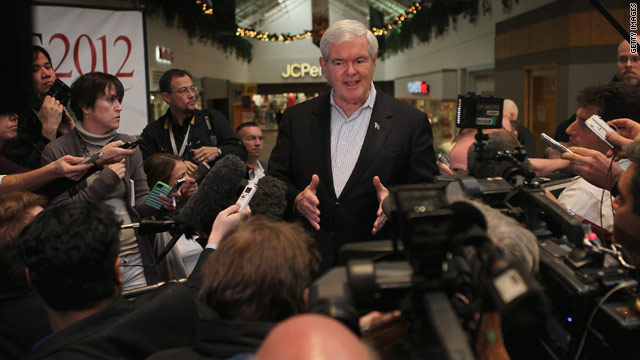 The former House speaker insists he is still running a positive campaign while he is stepping up his attacks on his main GOP rivals in Iowa.

Yes, the Gingrich campaign is running a new ad touting his plan for the economy. And it's positive.

"We can create millions of jobs right now," Gingrich says in the ad titled "Main Street."

And it's true that the chief Gingrich super PAC, Winning our Future, is also running an ad that steers clear of any attacks on the other candidates in the field.

But then there's the negative mailer distributed by a pro-Gingrich super PAC called Strong America Now. As reported by NBC News, the blog Iowa Republican, and Catholic.org, the mailer attacks Mitt Romney as the "second most dangerous man in America" after President Obama.

Records with the Federal Elections Commission show Strong America Now, previously a conservative organization based in Texas, has since launched a political action committee. The mailer makes it clear the PAC is squarely behind Gingrich.

Asked about the mailer at a brief news conference with reporters, Gingrich declined to condemn the super PAC.

"I would discourage them from sending any negative information. I think that's wrong," Gingrich said.

But in the last two weeks, Gingrich has called on the former Massachusetts governor to condemn a pro-Romney super PAC that has savaged the former speaker with a barrage of attack ads.

At an event in Mason City, Gingrich asked Iowans if they want to "reward" a candidate who runs negative ads.

In an interview with CNN's Wolf Blitzer, Romney blew off the complaint. The former Massachusetts governor chalked the ad wars up to the heat that comes with modern presidential campaigns.

"I don't know why he's so angry," Romney said to CNN's Wolf Blitzer.

Gingrich is willing to set aside his own pledge to stay positive when it comes to the other front-runner in Iowa, Ron Paul. The former speaker is part of a growing chorus of Republican contenders who are questioning Paul's hands-off approach to Iran's nuclear program.

"Do you feel comfortable in terms of my two grandchildren and everybody in this city with someone who believes that Iranian nuclear weapons are irrelevant?" Gingrich asked.

Arguing his criticism of Paul has only come in response to questions about the Texas congressman, the former speaker disputed the notion that he is trying to have it both ways.

It's a message tailor made for Arlene Roberts, an undecided voter who came to Mason City to try to meet Gingrich in person.

"We hate it. We hate it. You learn nothing," Roberts said about negative campaigning.

She said Gingrich's pledge to stay positive just might win her support. "It could. That's why I'm here," Roberts said.

"It's great for the speaker to try to voice a positive message and focus on solutions. But when you rise in the polls, you can expect opponents to push back," Yepsen said.

Gingrich, a master of the political attack for decades in Washington, is now caught in a box of his own making. Go negative and you break your word to keep it clean.

"Iowans say they don't like negative ads but in every campaign they sure react to them. If they didn't work, campaigns wouldn't use them," Yepsen said.