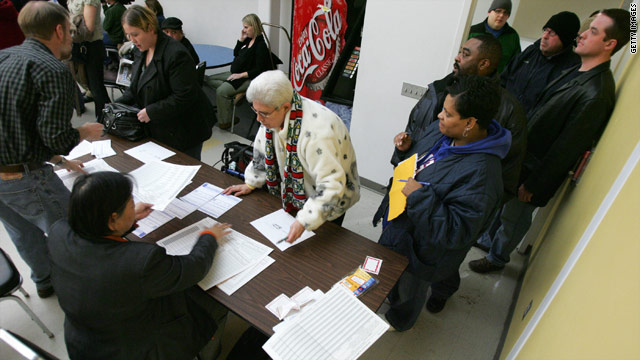 Des Moines, Iowa (CNN) – Republican leaders of the largest counties in Iowa tell CNN they expect a stream of party switchers and high, in some cases record, turnout in this year's GOP caucuses.

"We're expecting at least a 30 percent increase (over 2008)," said Linn County Republican Chairman Steve Armstrong. "Attendance has been up at every event we've held this year. Republicans are more engaged." Linn County, which sits in the eastern part of Iowa and includes Cedar Rapids, had the second largest number of caucus goers in 2008.

The sentiment that this could be a big number year is nearly universal in Iowa's most populous counties. CNN surveyed Republican leaders in the 12 Iowa counties which had the largest turnout in 2008. The state has 99 counties in total, but these 12 brought in more than half of the statewide caucus numbers the last time around.

"We're geared up. I printed 40 percent more ballots than we had people in attendance in 2008," said Rick Halvorsen, GOP chairman in Warren County, which is south of Des Moines. He expects a 30 percent increase in caucus-goers.

So it is around the state. The Republican chairwoman in Scott County in the east says she's looking for a 20 percent bump there. To the north and west, in Sioux County the GOP chairman says they're planning for a 20-25 percent spike.

And in Pottawattamie County, in the southwest corner, "We're going to set records, I'm sure," says Republican Chairman Jeff Jorgensen.

Jorgensen points out another common theme. "It looks like we're going to get a lot of new registrations, a lot of people switching over (from other parties)," he said.

To participate in the Republican caucuses, voters must be registered as Republicans. But, under Iowa law, they can switch party registration the night of the caucus.

This year, Jorgensen and most of the GOP leaders CNN surveyed say they are expected a larger-than-usual number of party switchers. All admit that some party switching is strategic and Democrats may sign up for the Republican caucus in order to support candidates whom they perceive as weak challengers to President Obama.

But most of the county Republican leaders think those will be the minority of party switchers this year.

"There are a lot of people calling who aren't familiar with the process calling and who are asking about how to switch parties," said Jorgensen, "That tells me they are mostly people who truly want to switch and vote Republican."

In the most populous county, Polk County, the party treasurer said phones were ringing off the hooks with calls about switching parties.
In Dallas County, party chairman Mike Elam sees a golden chance. "We feel there are a lot of disgruntled Democrats and independents," he said. Elam is pragmatic, though. "Some of them will switch for the night and others will stay through November. Those ones will be the key."

Of course, all the talk of high turnout and party switchers comes in a supercharged political atmosphere, where Republican activists know that perception can become reality. So is this just hype? The leaders in Iowa's heftiest counties, insist it's not.

"This is real," said Scott County chairwoman Judy Davidson. "People are upset and this is a referendum on what's happening."