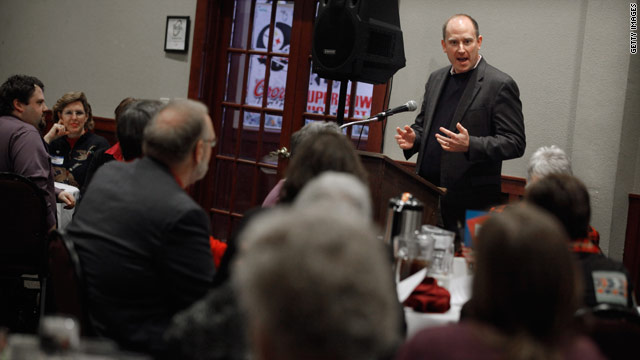 Spencer, Iowa (CNN) - A conservative group turned pro-Gingrich super PAC that distributed a mailer calling Mitt Romney "the second most dangerous man in America" after President Obama has touched off a political firestorm just days before the Iowa caucuses.

The chairman of the Iowa Republican Party, Matt Strawn resigned as co-chair from the organization, Strong America Now, just hours after details about the controversial mailer emerged Wednesday morning.

The mailer praises Gingrich saying the former speaker has "the proven experience eliminating the deficit and making America prosperous."

It goes on to slam Romney's plan to tackle the deficit, saying it "comes nowhere close to eliminating the federal deficit – at any point."

At a brief news conference in Mason City, Gingrich declined to condemn the ad.

"I would discourage them from sending that negative information. I think that's wrong," Gingrich said.

The former speaker insisted he plans to wage a positive campaign. But Gingrich has ramped up his criticism of his rivals in recent days.

News of Strawn's resignation was first reported by the website, the Iowa Republican, a blog that's widely read by conservatives.