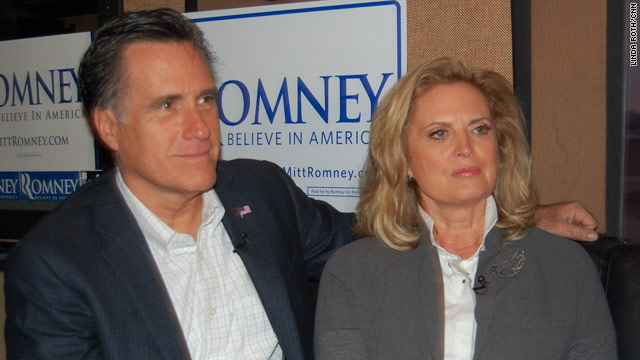 Romney: Why is Newt so angry?

"I don't know why he's so angry," Romney said on CNN's "The Situation Room with Wolf Blitzer." The full interview will air Wednesday at 5 p.m. ET.

"Look, this is a campaign about things we believe in," Romney said. "I believe the country's being led in a very unfortunate and destructive way by a president that doesn't really understand our economy and understand America. I can get America working again, that's why I'm running."

Romney said Gingrich's insistence that he condemn ads coming from a super PAC supportive of his candidacy was counter to the entire political process.

"I of course could get up and say I decry all of the negative ads and so forth, but I don't," Romney said. "I think it is part of the process. We could all wish for utopian-type process, but the process we have now is that way it's been for a long time. I hope ads that go up, despite showing contrast and distinction or attack, I hope they always tell the truth."

Responding to a direct challenge from Gingrich to participate in a one-on-one debate, Romney said he had already debated the former House speaker plenty of times and wouldn't agree to face him solo unless the other candidates dropped out.

"As for a one-on-one with Newt Gingrich – if he and I end up being the two finalists we'll have that opportunity," Romney said. "But now, I don't know, we've debated maybe ten times, we'll do more debates in January, but until he and I really are the two finalists why there really are people who still deserve to be on the stage."

Repeating a line he's used in debates and on the stump, Romney said he would support any Republican candidate challenging President Barack Obama. That's a far cry from Gingrich, who said Tuesday on CNN's "The Situation Room with Wolf Blitzer" he wouldn't vote for Texas Rep. Ron Paul if he won the nomination.

Romney said he hoped Paul would develop more mainstream Republican views if he became the nominee.

"I don't agree with a lot of things Ron Paul says," Romney said. "And I would vehemently oppose many of his initiatives and I believe we'd be able to move him in a direction that's more productive."

In the wide-ranging interview with Blitzer, Romney's wife Ann spoke candidly about her marriage, including the decision to put the couple on display in a recent television ad. Ann Romney said the spot wasn't meant to criticize rival Gingrich, who has been married three times.

"Whenever I speak about our life experience it is ours," Ann Romney said. "It's our story, it's not anybody else's story. For me to talk about my life, and how I feel about my husband is my story. It is never intended to be seen in a lens other than our story."