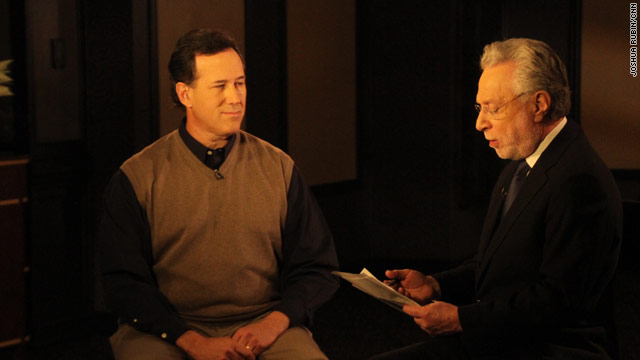 "It's like any small business person," Santorum said on CNN's "The Situation Room with Wolf Blitzer."

"If the money's not coming in, you've just got to work harder and that's what we're doing. We're going up in the morning doing radio shows at six in the morning and going until nine, ten at night and town meeting after town meeting. 357 in Iowa. Hard work pays off," Santorum said.

Santorum, who has long said Iowa voters would come around to him eventually, said his message of social conservatism combined with strong national security was making a dent a week ahead of the first-in-the-nation caucus.

"We've always felt we could trust the people of Iowa, that when they got down to the time they were going to look at all the candidates and measure up to people they've had the opportunity to see, that they would do well," Santorum said.

Mitt Romney, who led the Iowa poll at 25%, is too inconsistent in his message, Santorum said.

"His position on Romneycare, on marriage, on cap and trade, there's a whole laundry list of issues where Mitt's been all over the map," Santorum said.

"It's clear he had a choice and he made the wrong choice," Santorum said. "If you're looking at someone who is a conviction politician, who's not going to move around on the issues and present a clear contrast. Mitt Romney's never proven to win in an election where he had to get independents as a conservative."

"My concern is that Ron Paul would walk in there, day one, pull our troops back and leave an enormous void around the world," Santorum said. "He can do that day one without congressional approval. He can, as commander in chief, move our troops anywhere in the world, disengage from every place from Europe to the Middle East, China, abandon the Strait of Hormuz, pull the 5th Fleet back. That's one of the reasons I think you see folks who are having second thoughts."