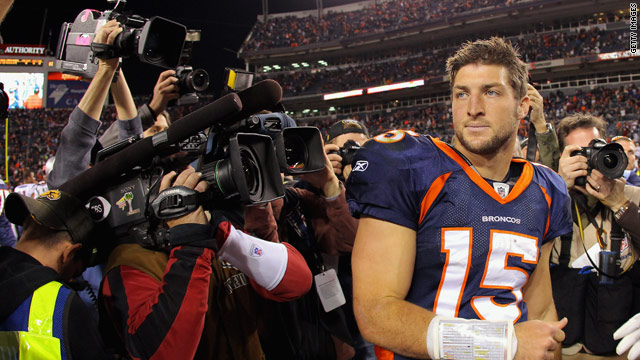 Tebow is known for his overt piety - he wrote Bible verses on the eyeblack he wore during college football games - and his faith makes him a popular figure among GOP candidates and conservative voters alike.

A voter at Mitt Romney's Wednesday town hall in North Liberty brought up the controversy over Tebow's frequent allusions to his faith.

"Over here she says Tim Tebow is catching it," said Romney, joking: "He's throwing it too."

He added: "I appreciate people who are willing to stand up for their differences and don't mind being a little different than everybody else."

In a debate in Sioux City in early December, Rick Perry famously said he hoped to be the "Tim Tebow of the Iowa caucuses."

Tebow has overcome low expectations to post a string of wins this season, though his team lost their last two games.