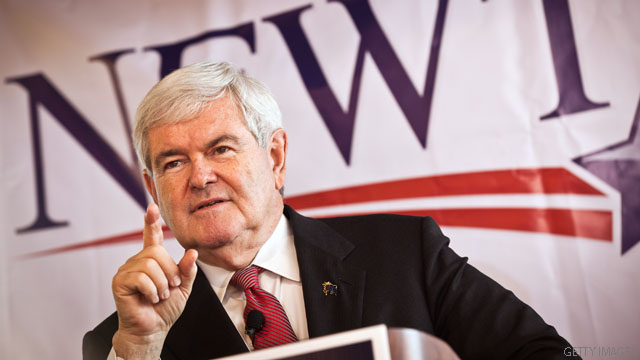 Spencer, Iowa (CNN) – Newt Gingrich has raised an estimated $9 million over the last three months but the GOP presidential candidate will carry over some of his $1.2 million debt into the new year, his campaign said.

Gingrich Press Secretary R.C. Hammond said the fourth quarter FEC report, which covers October 1 to December 31 and is due next month, will “reflect that we still have some of the existing debt obligations, but we will also in the same report have a positive balance and cash on hand.”

Hammond shared the information about the campaign’s financial health on the second day of Gingrich’s eight-day 22-city bus tour through Iowa - shortly after the new survey of likely caucus-goers indicated his support in the state is plunging.

“I don’t know how much cash-on-hand we will have, but any good campaign three days before the Iowa caucus won’t have a lot,” he said.

Gingrich is tapping into those fourth quarter funds to help organize in early nominating states and pay for television advertising in Iowa, where the former speaker is facing a precipitous drop to fourth place, according to the latest CNN/Time/ORC poll.

So far, his campaign has spent $1 million over four weeks airing television ads in Iowa. According to Hammond, this week’s ad buy alone is setting them back $500,000.

With the race still very much in flux less than a week before the first nominating contest, Gingrich needs to pour all of his resources into re-igniting the spark that propelled him to near the front of the pack.

Hammond said it’s not unusual for a campaign to carry debt obligations and still have cash on hand.

“I don't have a characterization or description of how much of the debt has been paid off or which vendors have been paid off. I will tell you we need to give a priority to the mom and pop shops who have been waiting on our invoices,” said Hammond.

As many as 50 companies and individuals had outstanding invoices by the end of the third quarter on September 30, including a number of consultants and nearly a half-million dollars spent on private jets over the summer.

While the $9 million sum is an improvement from the nearly $5 million Gingrich had brought in through the end of September, his competitor - former Massachusetts Gov. Mitt Romney - had already taken in $32 million at that point.

Hammond likes to point out that the former speaker has raised about as much as the 2008 Republican presidential nominee did in the same fourth quarter last cycle - before Sen. John McCain went on to defeat the well-funded first-time presidential candidate Romney.