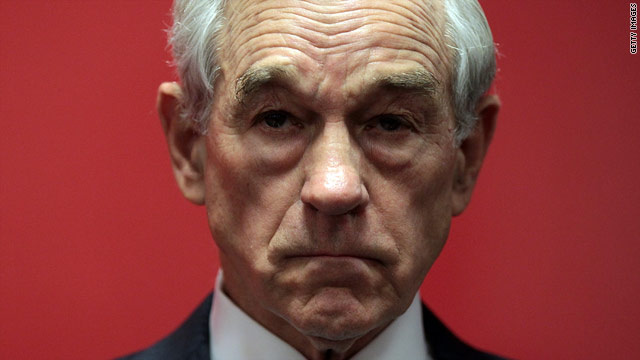 (CNN) – Though the Republican presidential candidates differ on whether they would support Ron Paul as their party's nominee, they agree it is a choice they will never have to make.

"If Ron Paul would get to the finish line, I'd be happy to support him, but he's unelectable, mostly because of his world view," Huntsman said in an earlier interview on the program.

The candidates' comments come as Paul has seen stronger numbers in state polls, including the CNN/Time/ORC International survey released on Wednesday. In Iowa, which caucuses next Tuesday, Paul is in second place with 22 percent, while both Bachmann and Huntsman are in the single digits.

But with the surge has come greater scrutiny towards Paul's 30-plus years in the public arena, including incendiary newsletters from two decades ago, which he denies writing and reading, as well as towards foreign policy positions very different from others in the GOP field.

"I can't buy the isolationist views. I can't buy [someone] who's not going to be engaged with the world," Huntsman said of Paul.

Supporters see the contrasts as a key part of the candidate's appeal, alongside the strict line he draws on government action and spending - which he suggests draws unease from his rivals.

"So I think they see me as a challenge for the status quo," he told CNN's John King in an interview last week. "There's a lot of people I challenge, everybody from the military industrial complex, to the banking system, to the bailouts, to our foreign policy."

A request for comment from the Paul campaign went unanswered.

Former House Speaker Newt Gingrich on Tuesday called Paul's positions on foreign policy and other topics "totally outside the mainstream of virtually every decent American."

"I think the choice of Ron Paul or Barack Obama would be a very bad choice for America," Gingrich told Blitzer in an interview from Iowa. Gingrich is the only candidate to say he would not support Paul as a GOP nominee.

"I would vote for him," Romney said on Wednesday, adding that, on some positions, "I don't agree with what he says."

Rick Santorum, the former Pennsylvania senator, told Blitzer he would also support Paul, though "I'd have to take a lot of antacids when I go into the voting booth and vote for him."