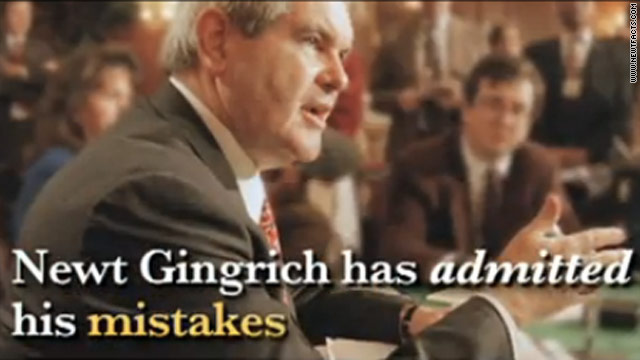 Des Moines, Iowa (CNN) - An independent group that supports Mitt Romney's bid for the GOP presidential nomination says it's going up with a TV commercial that highlights what it calls the many mistakes made by rival Republican candidate Newt Gingrich.

Restore Our Future, a Super PAC that backs the former Massachusetts governor, tells CNN that the new 30-second spot will run statewide starting Thursday in Iowa. The state's January 3 caucuses kick off the presidential primary and caucus calendar.

The ad uses clips of the former House speaker saying "it probably was a mistake," "I made a mistake," "I've made mistakes at times," and "I made a big mistake in the spring."

The narrator in the ad says "so far Newt Gingrich has admitted his mistakes or flipped on teaming up with Nancy Pelosi, immigration, Medicare, health care, Iraq, attacking Mitt Romney, and more," and ends the spot by asking "haven't we had enough mistakes."

Through this past weekend, Restore Our Future has spent over $830,000 to run commercials in the Hawkeye State, with much of them critical of Gingrich, who soared to front-runner status in Iowa and national polling late last month before fading the past two weeks.

For the past two weeks Gingrich has called on the former Massachusetts governor to condemn Restore Our Future for the onslaught of attack ads.

A new CNN/Time/ORC International poll indicates that Gingrich's support among likely Iowa GOP caucus goers now stands at 14%, a 19 point plunge from earlier this month. The Gingrich campaign blames the drop on the barrage of negative ads on Iowa airwaves.