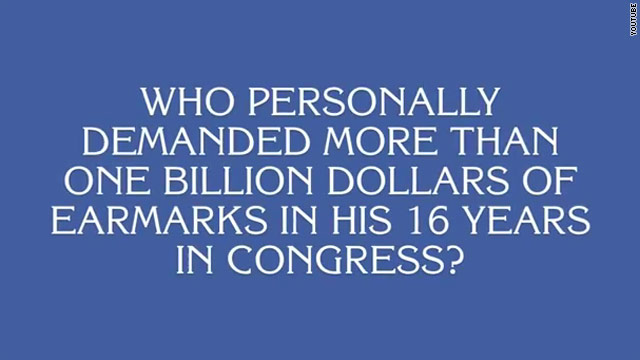 In a new radio ad released by Perry's team Thursday, Santorum is portrayed as a free-spending Washington insider who voted for earmarks and wasteful spending during his time in Congress.

Watch a web version of the ad here.

The ad mimics a game show, asking questions of contestants like "Which Republican running for president voted for the bridge to nowhere?" and "Who personally demanded more that $1 billion in earmarks to his sixteen years in Congress?"

Each time the announcer proclaims the answer: "Rick Santorum!"

The spot features a clip of Santorum saying he was "very proud of the earmarks" he wrote into spending legislation.

"Rick Santorum is proud of feeding at the earmark trough in Congress," Perry's ad proclaims.

Nick Ryan, the founder of a pro-Santorum super PAC, accused Perry of hypocrisy and said the Texas governor's administration has a long record of seeking earmarks from Washington.

"Rick Perry has spent this entire race trying to find a message and can't figure it out," said Ryan, who created the "Red, White and Blue Fund" to support the former Pennsylvania Senator. "Attack Newt. Attack Mitt. Attack Santorum. Unfortunately, it's desperation time for Rick Perry. Gov. Perry's own words probably sum up this hypocritical attack and are a narrative for his entire campaign: 'Oops.'"