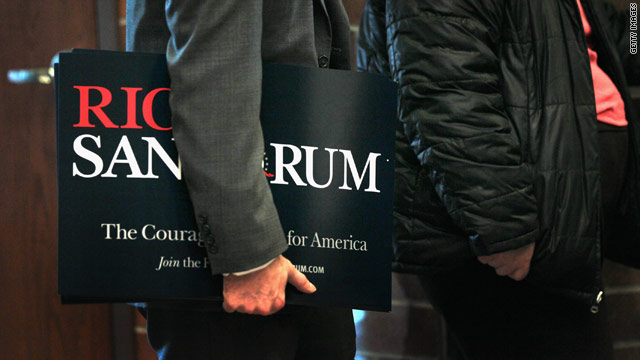 Coralville, Iowa (CNN) - Republican hopeful Rick Santorum –a man who experienced his first big bump Wednesday– said he's doing "pretty well right now" as he campaigned outside the college town of Iowa City Thursday. Referring to the media frenzy surrounding the candidate, one voter asked if it was "always a circus like this."

"No. This is the first day for things like this," Santorum said.

The first of many he hopes.

A CNN/TIME/ORC International poll Wednesday put Santorum in third place among people likely to attend Iowa's Republican caucuses. He was surrounded by reporters and network TV camera crews as he made his way out to his pickup truck after the event and was asked how it feels to have this kind of a following.

"It's been a while, let's just put it that way," the former Pennsylvania senator said with a smile before he climbed in.

At his press conference, Santorum said he's witnessed his crowds "getting bigger" in recent days, as well as his campaign phone calls "going better."

"All of that is a very positive sign," he said, adding that he believes it's a result of his months of grassroots-style campaigning across all of Iowa's 99 counties–some of them, he says, he's visited "two or three" times. "We've got a game plan in place. We stuck to it in spite of people saying it's not working."

The White House hopeful also said seemed confident he would press on after Iowa.

"I think we're doing pretty well right now. We're gonna go to New Hampshire after this," he said, adding that he hopes to soon see signs that folks there are coming around to him, as they may be starting to do in Iowa.

"People are starting to make their decisions and adjust allegiances as it always happens in a primary. Things move, and in this primary it's moved pretty quickly and pretty dramatically, and we feel that can happen in New Hampshire, too, as well as South Carolina and going forward."