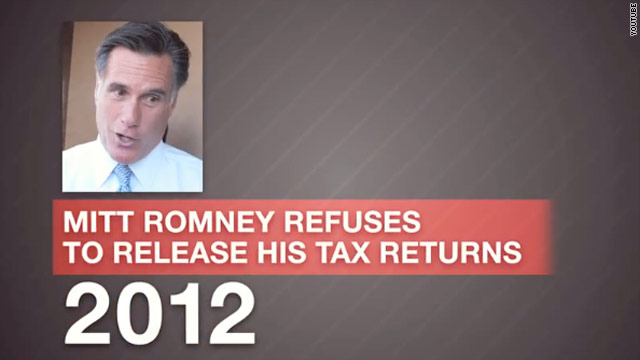 (CNN) - Mitt Romney's refusal to release his income-tax return became the object of national Democrats' indignation Friday with the release of a web video accusing the GOP hopeful of breaking with a longstanding political tradition.

The Democratic National Committee's spot, called "What is Mitt Romney Hiding," flips though past Republican presidential candidates who have released their income-tax information. The DNC highlights one notable example - George Romney, the candidate's father.

Text on the screen reads: "For decades, Republican candidates for president have released their tax returns." The examples date from 2008, showing pictures of Arizona Sen. John McCain and former Alaska Gov. Sarah Palin, to the George Romney case from 1968. Then governor of Michigan, George Romney unsuccessfully sought the Republican nomination for president in 1968.

In a release accompanying the video, DNC National Press Secretary Melanie Roussell predicted what would be revealed on Mitt Romney's tax release.

"It would show that on the millions of dollars in income he enjoys each year, Mitt Romney pays a lower tax rate than teachers, fire fighters, police officers or other middle class wage earners," Roussell wrote. "Mitt Romney will tell you that it's not required by the law that he release his returns but when he's advocating for policies that benefit the wealthy and the well-heeled, voters have a right to know what conflicts he might have with his own finances."

Romney repeated Wednesday on CNN's "The Situation Room with Wolf Blitzer" that he wasn't planning to release his tax forms, but left the door open for future disclosures.

He continued, "There's nothing particularly to hide. It's just when people say what disclosures are going to be made, you say you follow the law, and you provide that information. I don't put out what toothpaste I use, either."