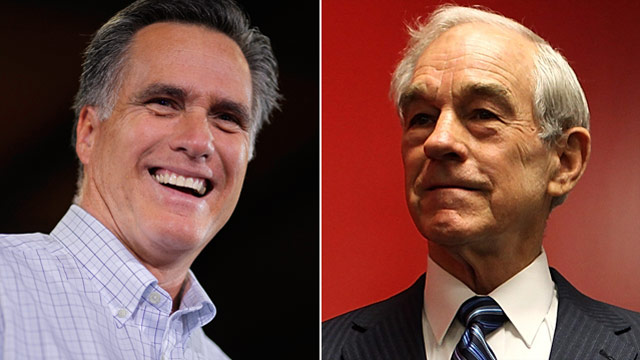 Des Moines, Iowa (CNN) - With four days to go until the caucuses, the two candidates at the top of the field are taking a short break from campaigning in the Hawkeye State.

After a stumping all day Friday in Iowa, Rep. Ron Paul heads home to Texas to spend New Year's weekend with his wife. The Paul campaign tells CNN the congressman, who's making this third bid for the White House, resumes campaigning in Iowa Monday morning.

Meanwhile, after an event in Iowa Friday morning, former Massachusetts Gov. Mitt Romney makes stops in New Hampshire Friday afternoon and Saturday morning, before returning to the Hawkeye State Saturday afternoon. He campaigns in Iowa all day Sunday. Romney is making his second bid for the Republican nomination.

Romney and Paul are basically tied for the top spot in an NBC News-Marist poll of likely Iowa GOP caucus goers than came out Friday, and in a CNN/Time/ORC International poll here in the Hawkeye State that released on Wednesday.