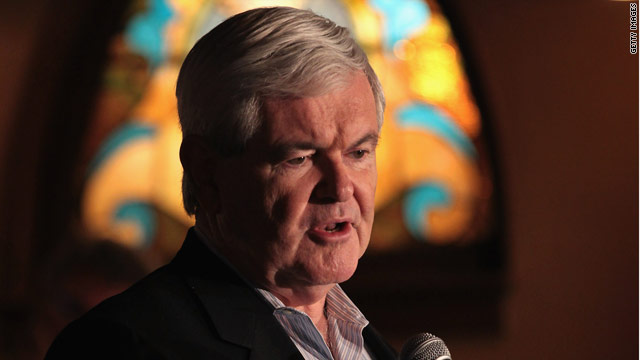 Carroll, Iowa (CNN) – The barrage of negative ads about Newt Gingrich's ties to Freddie Mac has proven so effective that Gingrich himself is considering fighting back with airtime.

Gingrich told a group of 100 or so people gathered at the Santa Maria Vineyard and Winery Thursday evening he is thinking about putting out an ad to address the claim he lobbied on behalf of Freddie Mac at the time of his lucrative multi-year consulting contract.

"[W]e may actually do an ad on this. I've been thinking about it for the last two days because this is clearly the one thing that is so direct and so immediate that it needs to be answered," said Gingrich.

The former House speaker has been getting peppered with questions about Freddie Mac from Iowans on the campaign trail, which has been fueled in part by the millions of dollars in advertising from GOP rivals Rick Perry, Ron Paul, and the pro-Mitt Romney super PAC Restore Our Future.

Anyone seeking an explanation of Gingrich's recent drop in Iowa polls may find answers in a new analysis of Iowa political advertising, which found nearly half of the political ads have been attack spots against the former speaker.

Gingrich has been trying to squelch the lobbying claims since his campaign released a detailed defense more than a month ago.

If the former speaker responds to these allegations with paid advertising, it will be a departure from the positive television spots the campaign has released so far.

After a man asked the candidate about his role with Freddie Thursday evening, Gingrich said the proof he did not lobby Congress on behalf of the mega-lender can be found in a New York Times July 2008 article, which states that Gingrich meet with House Republicans and encouraged them to oppose the housing bill that would have bailed out Fannie Mae and Freddie Mac.

"Now, you know I don't expect any of my competitors to run out tomorrow morning and run a brand new ad that says, oh gosh, Newt actually protected the taxpayer from Freddie Mac and Fannie Mae. But the truth is, if you look at the New York Times ad, the New York Times article, that's exactly what I did," said Gingrich in Carroll.

Gingrich has indicated in recent days he's been tempted to respond to negative attacks. On Tuesday he said to a crowd in Dubuque, "It's taken great discipline to not run ads that countered" negative ads distorting his record of experience.

That same day, the former speaker told a reporter he was not going to run negative ads "as a matter of policy." He has always said he reserves the right to respond to criticisms.

Gingrich has lambasted his opponents recently despite proclamations he's running a positive campaign. Still, he disputes the notion he's trying to have it both ways.