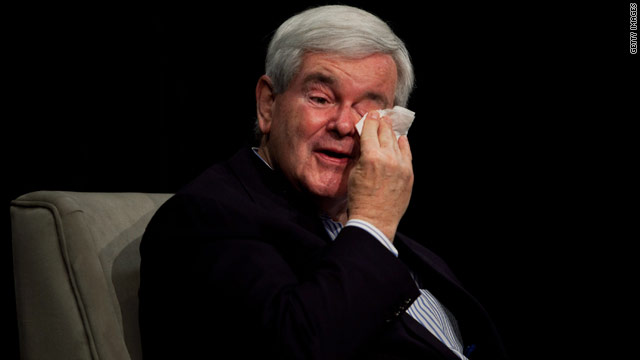 Gingrich tears up remembering his mother

Des Moines, Iowa (CNN) - Newt Gingrich teared up at a campaign stop in Iowa Friday, openly weeping while talking about his mother, who suffered from bipolar disorder and depression.

The moment was sparked by a question from GOP political consultant Frank Luntz, who was moderating a forum targeted to mothers at a local coffee shop Java Joe's in downtown Des Moines.

Luntz, noting the room had a number of moms present, asked Gingrich, "What moment do you think of when you think of your mom?"

"First of all you will get me all teary-eyed. Callista will tell you I get teary eyed every time we send Christmas cards," Gingrich said, coughing back tears.

Gingrich said his mother, who died in 2003, played a part in his legislative interests in long-term health care and mental disease.

"Late in her life she ended up in a long-term care facility. She had bipolar disease, depression and she gradually acquired some physical ailments and that introduced me to the issue of quality, long-term care."

Gingrich continued, stalling at times to fight back tears, "My whole emphasis on brain science comes in directly from dealing – see how I'm getting emotional – from dealing with you know the real problems of real people in my family. So it is not a theory. It is in fact my mother."

Moms Matter 2012, a group that describes its mission as "moving moms from the political sidelines to the headlines," sponsored the Gingrich event. Approximately 100 people were present, including a few mothers with young children.