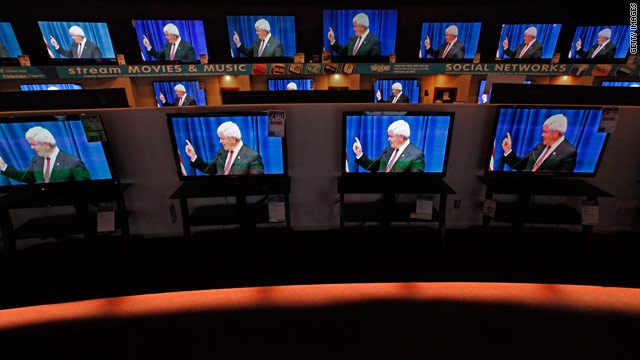 The survey, conducted by Kantar Media's Campaign Media Analysis Group, finds 45% of all political ads in Iowa have been attack spots against Gingrich. Only 6% were supportive of the former House speaker.

Gingrich's opponents were quick to pile on after he became the front-runner in December. A super PAC supportive of former Massachusetts Gov. Mitt Romney carried out a sustained assault on Gingrich's record, saying the former House speaker "has more baggage than the airlines."

Other candidates, like Texas Gov. Rick Perry and Texas Rep. Ron Paul, produced ads that slammed Gingrich for being a Washington insider who was paid to influence votes after he left Congress. Gingrich has denied those charges.

The amount of negative advertising against other candidates doesn't come close to the level of strikes against Gingrich. Romney, who has been running near the front of the pack in Iowa for months, has been negatively targeted in only 20% of the ads. Ten percent of the ads in Iowa have been pro-Romney, paid for by his campaign.

Even in ads attacking Romney, the focus was on multiple candidates, as in a recent Perry spot accusing him and several other GOP hopefuls of being career politicians. Ads pegged to Gingrich's record have tended to focus solely on him.

One candidate who's been the focus of intense attacks on the campaign trail has largely avoided being the subject of negative television ads: Ron Paul. The only presence the Texas congressman has on Iowa airwaves is positive, and it accounts for 3% of the total political advertising. After a jump in polls, Paul has come under fire for his foreign policy and views on Iran.

Perry was the only other candidate who appeared on the CMAG tracker. His advertising presence was equally split - 8% of the ads in Iowa were pro-Perry and 8% were anti-Perry. Perry has churned out several spots in Iowa and on national cable highlighting his record as a social conservative.