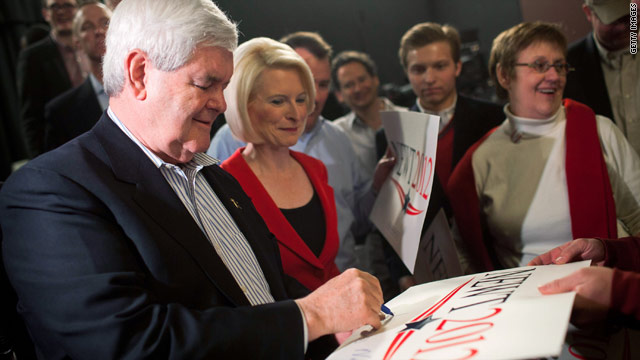 One Gingrich supporter steadfast despite polls

(CNN) - When business owner Brad Utter got a phone call two weeks ago asking him to host an event for Newt Gingrich, he immediately said yes and started recruiting people to attend the event the next Monday in Davenport.

At the time, Utter was leaning towards supporting Gingrich and is now planning on voting for him at Tuesday's caucuses.

Listen to the Political Notebook podcast: From Des Moines, CNN's Candy Crowley and Bob Costantini talk about the change in positions for the candidates, based on a CNN/Time/ORC poll. And an undecided caucus-goer checks out someone who didn't run.

Utter, who is president of a security firm, was one of those won over because he believes Gingrich would be the strongest opponent to President Obama and the debate performances by the former House speaker.

He is, however, disappointed in Gingrich's decline in support.

"I'm there but disappointed at the polls. I know polls are finicky," he said on Friday. "At the back of my mind he is dropping quite a bit in the polls and that is unfortunate.

Like most Iowans he has seen the barrage of television ads aimed at Gingrich and his past, including ethical problems while he served in the House and the controversial $1.6 million consulting contract his firm had with the mortgage giant Freddie Mac. Those issues don't bother Utter.

"It has had an impact. You can't spend millions of dollars and not have an impact," he said.

Utter was glad to just hear a radio ad from a political action committee in support of Gingrich.

"It is unfortunate that the Gingrich campaign doesn't have millions of dollars to counter those ads" that are attacking him, he said.

Also bombarding voters are an onslaught of mailers from all sides – both positive in extolling the virtues of a candidate and many others attacking.

"There is just so many of them. I wish I had the money they are spending on mailers," he said. His family is receiving at least 3-4 such mailers each day now.

Utter will be leading his precinct in Scott County in the eastern part of the state during Monday's caucus. As a precinct leader, he does not expect to speak on Gingrich's behalf since those officials usually don't stand up in support of a candidate.

In this campaign season Utter has met not only Gingrich but former Massachusetts Gov. Mitt Romney, Minnesota Rep. Michele Bachmann and former Pennsylvania Sen. Rick Santorum – an opportunity that many in the state relish.

"I think it is awesome. It goes to show if you are involved you can meet every potential candidate," he said.

As to criticism that Iowa should not hold such an influential role in the selection of a presidential nominee because it is not representative of the country, Utter begs to differ saying the state has conservative values and that should be a key factor in the process.

"There always has to be a first," he said. "By the virtue of being first I think it thins the herd a little bit."

Utter, however, hasn't been without some controversy, as well as some embarrassment for his candidate, as the Altoona Herald reported on December 20th that his business - the site of the Gingrich event - had a tax lien for more than $30,000 against it (see story on the side rail of the link here) .

Utter responded, saying, "The matter with the taxes was an internal oversight which has since been corrected with the IRS."