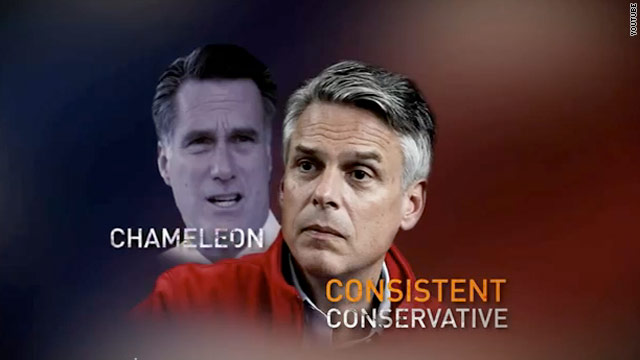 A source from Our Destiny PAC said the committee had put more than $300,000 into the ad buy in the run-up to New Hampshire's Jan. 10 primary.

The spot flashed images of GOP candidates including Herman Cain, Rick Perry and Newt Gingrich, before settling upon an image of Huntsman and Romney.

As a picture of Romney flashed on the screen, the announcer described the former Massachusetts governor as "one willing to say anything, be anything," while calling Huntsman the candidate who "can actually do the job."

"One state can stop the chameleon," the ad said over a picture of Romney, in a pitch to New Hampshire voters.

Huntsman has focused his campaign almost entirely on New Hampshire, and a poor finish in the state could end his presidential hopes.

Throughout the fall, Huntsman's campaign has produced a string of web videos hitting Romney for so-called "flip-flopping" on issues.

The Our Destiny super PAC is independent from Huntsman's campaign and is prohibited from coordinating with the campaign on strategy.

Huntsman's father, a chemicals magnate, has contributed some funds to the PAC.