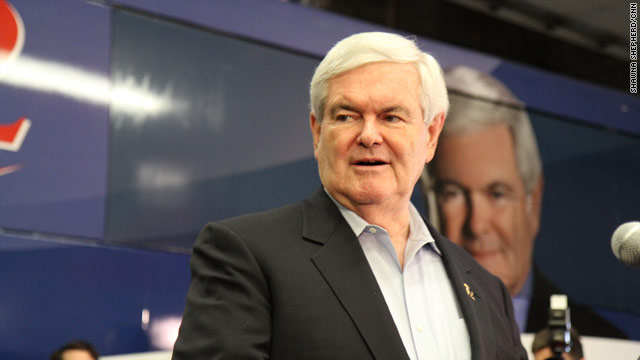 "It's a little bit daunting but we're going to continue to be positive," said Gingrich, after citing a recent survey analyzing political advertising that found nearly half of the ads in Iowa have been attack spots against the former House speaker.

Gingrich was speaking to a packed room at Tish's restaurant in Council Bluffs Saturday morning, the fifth day on his bus tour that he'll continue into the January 3 caucuses. Later in the day, he held a town hall at Coca-Cola Atlantic Bottling Company in western Iowa.

Gingrich is resolving to close 2011 by staying positive in the face of withering attacks that have eroded his support in the polls.

"We have positive ads about how to create jobs and how to balance the budget," he said at the Council Bluffs stop. "And I feel like I can afford to be positive - this may be a comment on our competitors - I'm very comfortable being positive because starting with when I was a very junior congressman working with Ronald Reagan we actually achieved positive things."

The former speaker is getting a boost from Michael Reagan, son of President Ronald Reagan, who suggests in a half-hour special that Gingrich is the candidate to carry on the legacy of his father. The conservative publication Newsmax will broadcast "The Newsmax 2012 Election Special" on "major broadcast outlets" in Iowa throughout the weekend.

The Gingrich campaign, which says it has raised $9.5 million in the fourth quarter, sent out a fundraising pitch on New Year's Eve urging supporters help him raise $500,000 to reach $10 million.

The e-mail acknowledged the campaign's "fair share of highs and lows" over the last few months.

"This has been a tumultuous quarter, with its fair share of highs and lows. The media is less than thrilled with the idea of an experienced conservative systematically dismantling the failed liberal policies that they champion," the e-mail said. "This election is a historic clash of ideology, and if the ideals of liberty are going to carry the argument, our nominee must not timidly pull his punches."