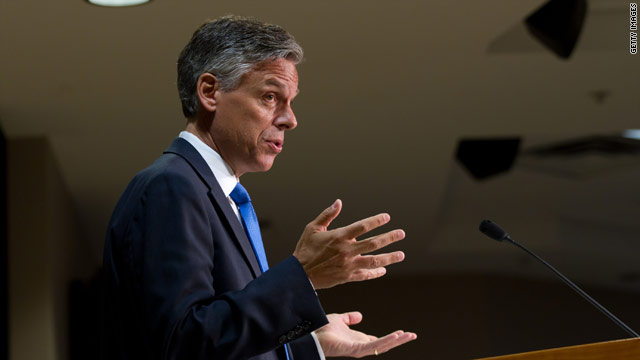 Des Moines, Iowa (CNN) - One of Jon Huntsman's chief strategists is calling for an aggressive campaign in South Carolina, even if the former Utah governor falls short of winning the New Hampshire primary - the centerpiece of his nomination strategy.

"Exceeding expectations in (New Hampshire) can trigger a critical burst of momentum for Governor Huntsman in South Carolina if we act quickly," Quinn wrote in the private memo obtained by CNN. "He has not yet been well-defined here and his strong conservative record will play well – particularly in the conservative upstate."

The memo, which includes a detailed voter ID strategy and county-by-county turnout model, does not define what "exceeding expectations" in New Hampshire might be - though most Republicans agree that Huntsman needs to win the state or at least surge into a strong second place finish to soldier on.

A CNN/TIME/ORC poll released this week had Huntsman at 9% in New Hampshire, putting him a distant fourth behind Mitt Romney, Ron Paul and Newt Gingrich.

In South Carolina, Huntsman is an afterthought. While there have been few reliable recent polls in the state, he has consistently registered in the low single digits.

Huntsman has focused most of his campaign resources in New Hampshire, but has kept a four-person staff in South Carolina in the event that his campaign moves forward.

Quinn, who advised Arizona Sen. John McCain's successful 2008 campaign in South Carolina, says in his memo that Huntsman can follow a similar path to victory: remaining competitive in the socially conservative and evangelical-heavy upstate, and running stronger in the midlands and along the coast where fiscal concerns are more important.

"Gov. Huntsman has the flexibility to get his conservative message out in the Greenville and Spartanburg market while also devoting the necessary time and resources along the coast and in the midlands focusing on his economic record," Quinn wrote, calling Huntsman a "natural fit" for the coastal counties that racked up big margins for McCain in 2008.

The comparison is not without flaws. While McCain and Huntsman might share an appeal in moderate-leaning swaths of the state, McCain had previously run for president in South Carolina in 2000, and then worked the state politically for years before his successful primary bid in 2008.

His turnout prediction is also optimistic. Quinn estimates that 500,000 voters will show up for the Republican primary.

A pool of voters that large would presumably include a heavy dose of independent voters, which could boost Huntsman's showing.

Republican operatives in the state, however, have forecast a turnout somewhere between 400,000 and 450,000.

In plotting a message, Quinn calls for direct attacks against former Massachusetts Gov. Mitt Romney, who is quietly making a play to win the state after losing it badly in 2008.

"Romney's record on health care will hurt him in the upstate; particularly if we are able to get the word out about his out of control health care spending," Quinn wrote. "Polling shows voters care about government spending, and this is a winning issue in (South Carolina)."