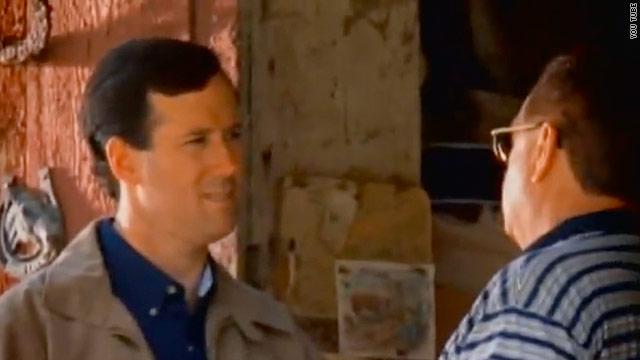 Des Moines, Iowa (CNN) - With three days to go until the Iowa caucuses, Rick Santorum's campaign is going up with a new TV commercial which says the former senator from Pennsylvania is the most qualified Republican presidential candidate to take on President Barack Obama.

The Santorum campaign says the ad starts running statewide in Iowa on Saturday. A top Santorum aide tells CNN the 30-second spot, which will be accompanied by radio commercials and direct mail, is the campaign's closing ad in the Hawkeye State and will run through Tuesday's caucuses, which kick off the primary and caucus calendar.

"Who has the best chance to beat Obama? Rick Santorum. A full-spectrum conservative, Rick Santorum is rock-solid on values issues. A favorite of the tea party for fighting corruption and taxpayer abuse. More foreign policy credentials than any candidate," says the commercial's narrator.

The ad concludes with the narrator saying that "Rick's "Made in the USA" jobs plan will make America an economic super power again. Rick Santorum... a trusted conservative who gives us the best chance to take back America."

Santorum, once a long shot in the race for the GOP nomination, has surged to third place in the two most recent polls of likely Iowa Republican caucus-goers, by CNN/Time/ORC and by NBC News/Marist.

The campaign says the 30-second spot will also begin running next week in New Hampshire. The Granite State holds the second contest in the race for the White House, with its January 10 primary coming one week after the Iowa caucuses.