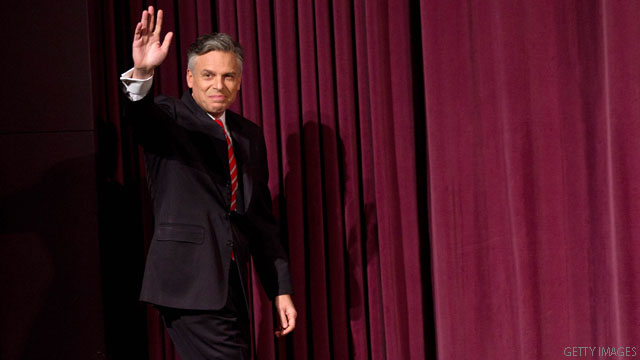 Huntsman offers up own money for bid

(CNN) - Jon Huntsman is reaching into his own pockets to prop up his presidential campaign.

The former Utah governor and U.S. ambassador to China will match donations to his campaign dollar-for-dollar until midnight Sunday, according to a statement from Team Huntsman.

"Whether you contribute $10, $100, $1000 or the maximum amount of $2,500, Mary Kaye and I will personally match every dollar you donate," an email from Huntsman read. "At every campaign stop, I can feel the momentum building for our campaign."

Huntsman is the only major Republican candidate to focus his efforts almost entirely in New Hampshire, which, on Jan. 10, hosts the second contest and first primary on the road to the White House. His poll numbers in the state have edged up in recent weeks, but he has failed to reach the top tier of candidates in the Granite State.

The money move follows the $2.3 million in personal funds he loaned his campaign through the end of September. In addition, his father, Jon Huntsman, Sr., who founded the chemical company Huntsman Corporation, has helped back a super PAC supporting his son's 2012 bid.