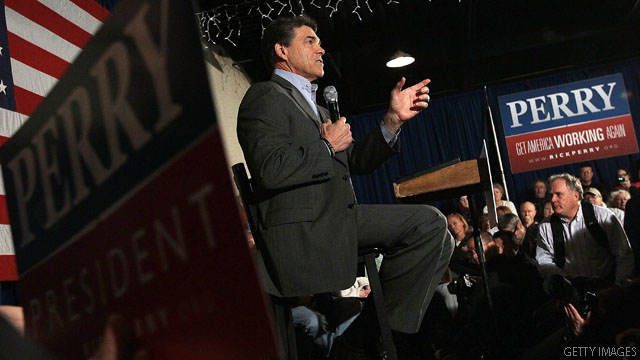 Des Moines, Iowa (CNN) – Rick Perry is enlisting his most prominent supporters for a major rally on the eve of the Iowa caucuses as he makes his final push for a third place finish on Tuesday, CNN has learned.

On Monday night, in the appropriately named Iowa town of Perry, the Texas governor and his family will hold their final event of the day alongside Louisiana Gov. Bobby Jindal and Kansas Gov. Sam Brownback, both of whom endorsed Perry early in the race.

Joining them on stage will be former presidential candidate Steve Forbes, the chief proponent of Perry's flat-tax proposal, and Texas Lt. Gov. David Dewhurst, a longtime Perry ally in Austin.

South Carolina Rep. Mick Mulvaney, one of the most popular conservatives in the early Southern primary state, is also making the trek to Iowa for the Perry rally.